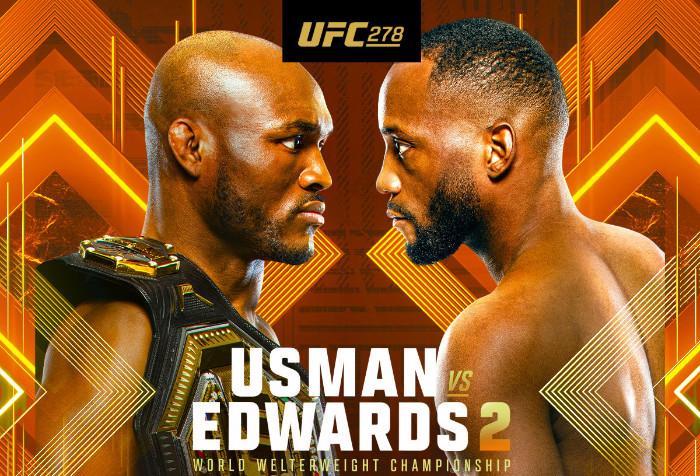 This contest will be much closer than most people would expect. There is a very clear path for Leon Edwards to win multiple rounds in this fight and get a decision on the judge’s scorecard and become a UFC Champion.

Edwards has a very clear advantage in the striking department. He is faster with better footwork and spacing control. In particular, his left straight left hand is likely the best in the division and his kicks are much smoother than anything that Usman offers. The power advantage still belongs to Usman, but I will tell you why I don’t think that going to matter.

The likelihood of this fight going the full five rounds could be as high as 75%. Knockout opportunities are going to be hard to come by in this fight and power shots will be difficult to land. Edwards should win every round that does not result in him defending from his back or being pressed against the fence for an extended time. Can he do that for three out of five rounds? Yes maybe.

Edwards has stated often how much he has worked on and improved his grappling and takedown defence over the past seven years since the first installment of this matchup. But truthfully we do not know for certain if it has improved enough to defend the likes of Kamaru Usman. Certainly, Nate Diaz did not offer us any answers to that question either. So we will just have to wait and watch for the answer, but my instincts tell me this fight may not go the same way as the first.

The odds for this fight should be much closer to even money than the (+295) line currently posted. I would not necessarily project Edwards as the favourite, but the betting value should belong to Leon Edwards.

Prediction: A five-round decision with each man winning at least two rounds.

This fight is another example of a line that should be much closer to even money than the posted line. Considering the two most recent performances of Paulo Costa, this line seems unreasonable high.

The key to victory for each man lies in their mental preparation. This is exactly where I would give a huge edge to Rockhold. Costo just appears unstable to me with a questionable grasp on reality. He makes excuses when he loses and is routinely unprofessional in his demeanour and preparation.

Luke appears the opposite, clear and focused. I have heard some questions about whether this is just an act on his part, but again I am just going on my instincts from watching interviews with him.

Rockhold will be at serious risk of being knocked out in this contest. Costa has the power to knock any man out if he can land. But the longer this fight goes, I think the more it favours Rockhold. I see Costa getting frustrated by the third or fourth round by not landing his punches and ending up on his back from either a knockdown or takedown and being in serious trouble beyond that point.

Prediction: Rockhold catches Costa with a high kick in round four resulting in a knockdown followed by a stoppage from ground & pound or a choke.

This fight should almost certainly go the full three scheduled rounds and be decided by the judges. If there is a stoppage to be found, it will likely come from Aldo who has better power.

The fact that this fight is only three rounds is a major advantage for Aldo. Surviving five rounds of the relentless pressure Dvalishili presents would be a difficult task for any fighter in this division. He has the ability to control an opponent and weaponizes his pace.

But this matchup is very similar to that of the main event. Aldo possesses some of the best take-down defence this division has ever seen. If you combine that with the experience of 15 previous championship fights, this should make for an extremely close affair.

Father time is not on Aldo’s side here and there is always the possibility that he simply will be able to match the pace of Merab. But if he can maintain enough distance in the fight, he could easily win two of the three rounds.