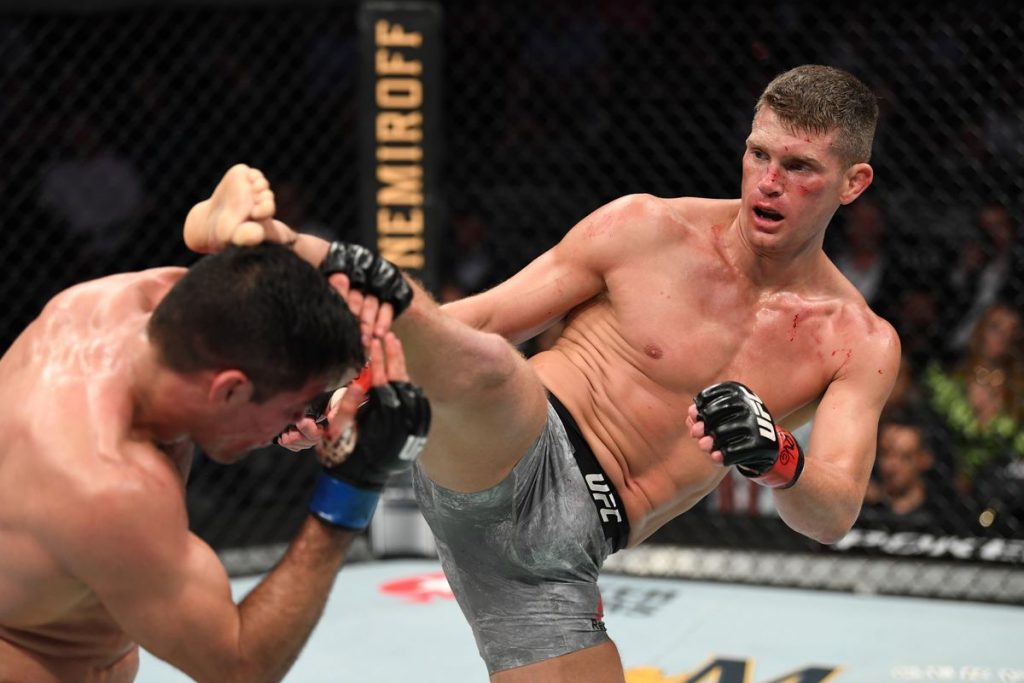 This is a bad matchup for Gilbert, so much so I question his motives for taking the fight. He has little to gain but a lot to lose. If he wins, he likely does not get a rematch with Usman. If he loses, he could fall quickly down the rankings where it could take him years to recover for another shot at the title. It is admirable for him to want to stay active within the division and Dana does tend to reward such fighters whenever possible. There is also the money factor and obviously more fights means more money, even if it isn’t for a title.

Stylistically this match serves to be a major obstacle for Burns. He is a jiu-jitsu master and his grappling skills are exceptional. But the problem is that Wonderboy is the greatest pure kick boxer this division has ever seen and he has made his living keeping guys like Gilbert out of range of grappling and inside boxing. No one has much success taking down Thompson to the ground on a regular basis and I do not expect this to change any time soon. Without being able to implement his preferred game plan, Burns is will likely be forced to fight the style Stephen wants to fight and that is a kick boxing match.

Burns is a skilled boxer and is known for pushing the action and for high punch counts, but he is going to have a difficult time getting in close to Thompson who is the master of keeping distance. There is a possibility that Burns can get a knock out but with two guys as talented as these two, this will always be a possibility. But is it likely? No, Stephen has been only knocked out once in his career which includes 57 kickboxing matches. The more likely scenario is this fight goes to a decision and this possibility is heightened by it only being a three round fight. I’ll tell for certain, if this fight goes to the judges, Wonderboy is going to get his hand raised a large percentage of the time. This possibility alone should make him a large favourite, much more than 3:2 in my opinion.

I am not going to make an official prediction on this fight primarily because I could not even find any footage of Moutinho to watch. As a rule I will not make a wager on a fighter I have never even seen fight before. I did watch the pre-fight press conference of him speaking and he looks like a highly intelligent and motivated guy. His cauliflower ears are testament to years in the gym and possibly thousands of hours of sparring.

One should really appreciate how much of a small difference their is in skill there is between the UFC and some of the lesser known organizations. The talent gap is not nearly as deep as you might think, particularly at the lower weight divisions including Bantamweight where this fight will take place.

Sean O’Malley is a fan favourite and a fighter with a lot of flare and potential. But in my opinion 8:1 betting odds should be reserved only for fighters with long proven track records. Sean may get there eventually, but it would be a stretch to put him in this category right now. The temptation would be to bet this fight at short odds and attach it as a parley to the main event to bolster a big ticket.

I would advise against this strategy. It would only take a freak injury like O’Malley suffered against Vera, and your night could be ruined before it even got started. Other possibilities included a flash KO by headlock or an overhand high bomb. If Mountinho turns out to be a exceptional wrestler, there are many scenarios where he could control his opponent on the ground for 2 of 3 rounds and get a cheap decision.

My point is there are a lot of things that could go wrong in this fight against an unknown opponent and the risk reward ratio is not particularly good. Sean should certainly be considered the favourite and if you want to make a bet on him, go ahead. Just do not bet the house thinking this is free money.