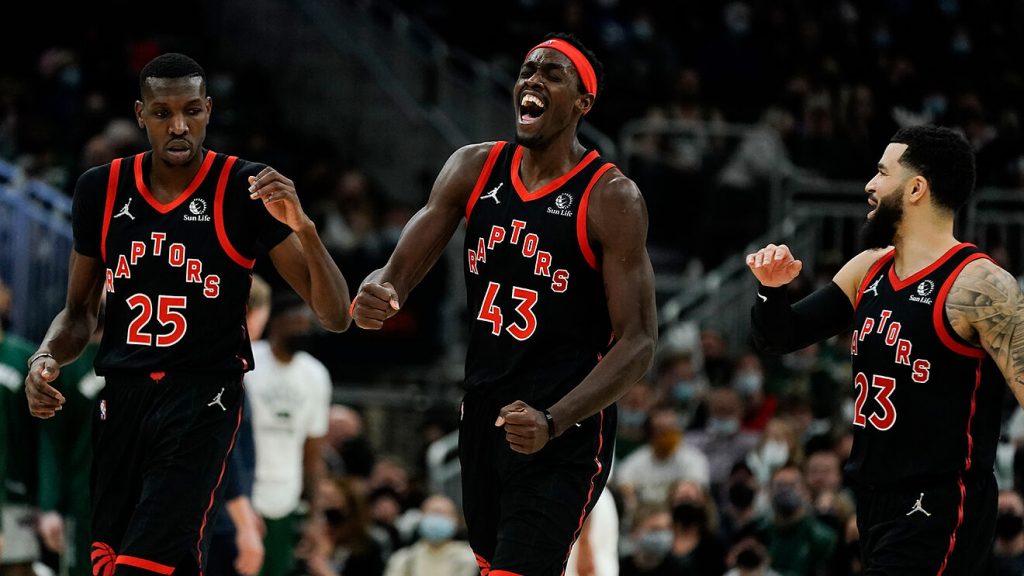 Today I will bring your attention to the Toronto Raptors as we continue the series of articles on Last Word on Basketballdetailing the playoff prospects of each team still in contention for an NBA Championship in 2022.

The first thing I would like to remind everyone is it was less than three years ago the Toronto Raptors won their first NBA Championship upsetting both the Milwaukee Bucks and Golden State Warriors.  Can we quickly make a list of teams without any Championships in their franchise history: Suns, Jazz, Grizzlies, Nuggets, Clippers, Timberwolves, Nets, Hornets, Pelicans, Pacers and Magic.

How many members of that championship team are still with the club?  You have to start with head coach Nick Nurse who was masterful that season with his game planning and matchups.

Next of course, is Pascal Siakam who was a vital piece of that championship team.  Interestingly if you look at his numbers for this season, they are better in every major category relative to three years ago.  Now he is asked to lead this team with his veteran experience.  A strong argument could be made that he should have been an All-star this year. He should at least be considered a current top 25 NBA player.

What is a playoff contender without an All-Star guard?  Check, enter Fred ‘All-Star’ VanVleet fresh off his first appearance in the annual classic.  Fred has been asked to replace the production and leadership of the ghost that shall be only named ‘Kyle’.  He has done an admirable job at doing just that.

The biggest part of that championship team was, of course, Kawhi Leonard.  The Toronto Raptors counter this season with rookie Scottie Barnes.  A rookie will never replace what Kawhi did that season.  But Scottie has been solid all season and he seems to be improving every night.  He should not be left out of the rookie of the year consideration and still has a chance to win that award with just a couple of big performances down the stretch.

Two more players round out the Toronto Raptors starting rotation with Gary Trent Jr and OG Anunoby.  What a steal Toronto pulled off prying Trent out of from Portland for Norman Powell.  Gary has fit into the Raptors’ system perfectly with his clutch 3 Point shooting and good defence.  OG is another solid starter for the Raptors and is best known for his hustle and defensive skills.

The Toronto Raptors started the season just 14-17 after a slow start and were hit hard during quarantine season.  Since then, they are 25-13 (.658) and currently boast a five-game road winning streak.  They caught the Cavaliers for the sixth and final guaranteed playoff spot who hold identical 39-30 records.  I expect Toronto Raptors to finish in the top 6 ahead of Cleveland and they may even run down the Bulls if they don’t regain their early season form.

The Toronto Raptors played most of their season without any fans and their home record is an unremarkable 17-15.  But let’s make a list of quality road wins Toronto has pulled off this already season.  They have road wins in Boston, Philadelphia, Memphis, Milwaukee, Miami, Minnesota, Brooklyn, Phoenix, Denver and LA Clippers. That is a list of 10 of the 15 other teams currently in playoff spots.  The season is not yet over so they can still add Cleveland and Chicago to that list as well.

The Raptors are near the top of the NBA in three major team stats.  They are 2nd in offensive rebounds, 3rd in steals, and 4th in turnovers.  These key stats are often overlooked by casual viewers and set an identity for their style of play.  They are well-coached and gritty.  There are no easy games against the Raptors and if you have any mental lapses, they will punish you with hustle.

The Toronto Raptors do not have a dominant center to match up against other big men like Joel Embiid, Bam Adebayo, or Giannis Antetokounmpo.  Their five-spot was mostly filled by committee this season.  Officially Siakam is the starting center most nights, but several other players have spent time in this role as well.  Toronto counters with their positionless basketball scheme and their lineup are ideally suited to make those rotations fluidly.  This may be less of a team weakness as it is their team identity.

This is where this team breaks down a bit.  But lack of bench depth is a bigger concern in the regular season when starters often miss long stretches of games and backups get more playing time.  In the playoffs, the benches shorten and teams 9-12 bench players usually get little or no action.  Coach Nurse has already shown his willingness to play his starter’s big minutes and they have responded well showing little signs of fatigue, so far.

Chris Boucher and Precious Achiuwa are both solid centers/forwards that fit the Raptor scheme well.  But Toronto lacks a quality third option at guard.  This could be a problem as it will force VanVleet and Trent to each play 40+ minutes per game.  This leaves the Raptors with essentially a seven-man rotation and no other players are likely to see any significant playing time in the playoffs.

If the Raptors expect to be contenders this year they must stay healthy through the playoffs.  A season-ending injury for any of their starting five would be devastating.  With each of them playing big minutes, it almost seems likely that eventually one of them will falter.  VanVleet missed a few games recently with a sore knee but is soldiering on.  Anunoby is out with a broken finger but is expected to return before the playoffs.  Raptors fans can only pray that lightning does not strike down their team’s hopes for glory.

The Raptors are serious Championship contenders this season, but there needs to be an asterisk beside this statement.  As good as there are, a single sprained ankle could derail this team’s potential and send them home in just five or six games against a deeper team.  The eastern conference is packed tight this season and there is very little separating the 1 through 8 seeds.  Something as small as a favourable bounce on a buzzer-beater like the one Kawhi hit in game 7 against the Sixers, could be the difference between glory and defeat.

I can see the Raptors pulling off a first-round upset against a team higher in the standings followed by a game seven loss in the second round.  The Toronto Raptors are a team on the rise, however, and another finals appearance may be only one more year away.

You can follow more of my NBA writings on my Daily Picks page or right here on Last Word on Basketball.  Sign up for my Newsletter to get off of pick Best Best delivered directly to your inbox.  You can also find me on Twitter to stay up to date on all my latest blogs and helpful tips to grow your bankroll.