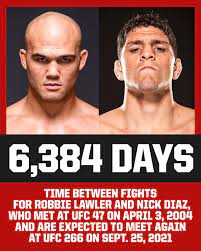 Yes I know this fight is getting third billing on this card, but really it is easily the most interesting fight on the UFC 266 card. I would have preferred see it headline a smaller fight night so that it would get the proper billing it deserves.

It was been 6,384 days between UFC 266 and the first meeting between these two fighters on UFC 47 which is considered one of the most iconic fights in UFC history. Both were just 18 years old in 2004 and each would go on to be multi-promotion champions. It could mark the final fight for both of these HOF fighters and nothing could be more fitting than seeing them go out together.

Robbie is coming off 4 consecutive loses for the first time in his career and really fifth would most certainly come with an automatic retirement package from Dana White. Nick Diaz is returning to the octagon for the first time in over 5 years after receiving his third suspension for marijuana use. It would seem as if Nick was just waiting for his one last opportunity to go out in a ‘blaze of glory’ against an old foe.

I see Nick taking control of this fight from the beginning as I do not expect him to lose much speed or intensity even after the long lay off. He has always been a better boxer than Robbie and I expect him to frustrate and out point his slower yet more powerful opponent.

Diaz has only been finished once in 35 professional fights and that was 19 years ago, so I do not expect to see him getting knocked out even if Robbie is able to tag him with a well timed power shot. If anything, the long lay off should be good for his already legendary chin.

If Lawler is unable to get a KO, I do not like his chances of getting a judges decision. The longer this fight goes, the more it favours Diaz and an unanimous decision for Diaz seems the most likely conclusion to this fight, especially considering it is only scheduled for three rounds.

After watching video of him in training for this UFC 266 fight, it seems Nick has matured with age and has embraced his role as teacher in the only thing he has ever known or been good at, martial arts. Never forget he is also BJJ black bet wizard and it would not even surprise me to see him break out some of his old moves and get a submission.

Nick has always had a huge chip on his shoulder and felt the entire world was against him. His multiple suspensions for a legal substance were harsh to say the least. Certainly it kept him motivated over his long absence to prove to everyone that he has the heart of a champion.

I have been on fire this year on my previous UFC selections going 19-8 with a huge +19.4 net units won. Go back and check my last selections including UFC 265 and be sure to check back to my Daily Picks page for further predictions on the UFC 266 card later in the week.