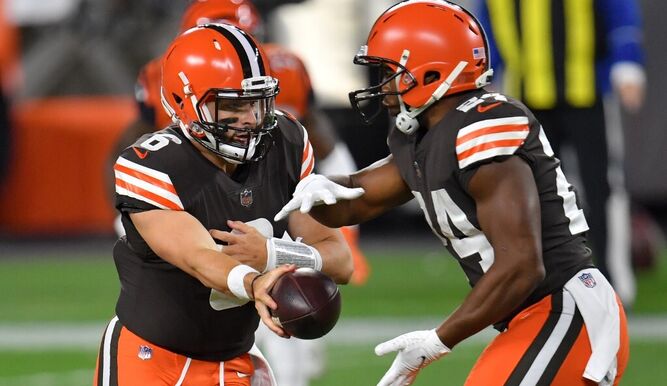 This is going to be a great game between two like NFL playoffs teams this year and is actually a playoff rematch from last year when the Chiefs won 22-17. This was a really close game and the Browns were only a bad bounce or a 4th down stop away from winning this game and advancing to the AFC Championship game.

I was hoping to get this game at (+6) but I wasn’t able to pull the trigger earlier this week when it sat there. Regardless I think this will be a close game and the points here could easily come into play. Baker Mayfield has been clutch in late 4th quarter drives and he could find a back door cover here if it is a two-score game late. The combination of Nick Chubb and Kareem Hunt has been a great combination behind one of the best offensive lines in the NFL.

The Chiefs should have another good year and easily make the playoffs again, but I do have some concerns. The Bucs beat them in the Super Bowl last year and they did it primarily by getting pressure on Mahomes with just a 4 man rush and dropping back five in coverage. This is a formula that many teams in the NFL will attempt to replicate this season, although actually pulling it off may be more difficult on the field than on paper. Regardless, the playbook has been written about how this team can be beaten.

The Chief’s weakness is their offensive line and they brought in four new linemen to fill that gap this season. The team’s success in 2021 will depend heavily on how well they are able to protect Patrick Mahomes.

The combination of Ryan Tannehill and Derrick Henry has been a recipe for consistent home victories for a couple of seasons and I see no reason why that should not continue. I like this combination better than Kyler Murray and Chase Edmonds.

Kyler is a great talent, but I still rate him below Russell Wilson and his decision-making is still questionable at times. Getting a road victory in Tennessee is going to be difficult for any team and I would need to be getting more than just three points in order to back the Cardinals in this matchup.

As the MLB season begins to wind down, I will be releasing fewer baseball picks and focusing more on football.

Lance Lynn comes back after a couple of week of rehab from a knee injury to make a warmup start for the upcoming playoffs. He is likely to win the CY Young award this year as the best pitcher in the AL. I like backing this White Sox team with their best pitchers on the mound that can get late into games with a lead. This allows them to get to their closers Hendricks and Kimbrel who is the best in the league.

The Red Sox are hanging on to a one-game lead over TOR and NYY in the wild card race and I fully expect this team to be on the outside looking in as the playoffs begin. Pivetta has struggled this season with his 5.22 ERA and 1.41 Whip giving up too many HRs and walks.

The teams are fairly even in the hitting department, but this is a big big pitching advantage for the White Sox today at home.

Be sure to check back Daily for your football picks every week for free.