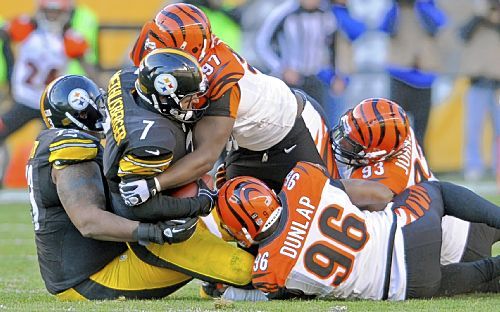 The Steelers are not a good football team and they proved me right again last week. They are last in the NFL in rushing yards by a large margin and still do not have a 100 yard rushing game for the season. You can not win games consistently in the NFL if you do not have a rushing threat. This week it gets even worse as they face the second best rush defence in the NFL in the Broncos.

To make matters worse, Roethlisberger is playing even worse than last year when he had his worst season as a pro. His yards per throw are down from 6.3 to 6.1 compared to last year and his career average of (7.7). He has only 4 TD passes through 4 games which is on pace to be the lowest in his career by far. He just cannot seem to get his timing down against defences when they are practically waiting for him to make those short passes and pouncing on the receivers.

Broncos picked up their first loss of the season playing their first quality team of the year in the Ravens. Denver will benefit from a soft schedule this season but may very well struggle against good teams. Fortunately the Steelers as I have mentioned several times already, are not. I expect their defence to attack at full speed likely forcing a few sacks and turnovers. This should set the offence up with some short fields in what should be a low scoring game. A 20-13 Bronco’s win sounds about right.

I have bet against the Steelers every game this season and I am going to keep doing so until the line makers finally adjusts the number to where it should be.

Panthers lost in a shootout against the Cowboys last week and the defence gave up 36 points last week after only allowing 30 points in their first 3 games. Despite that performance, I still rate the Panther’s defence as the best in the NFL (the only possible exception being BUF).

Jalen hurts played well last week leading his team to 30 points in a loss against KC. This matchup is going to be very different as the Chief’s defence is not nearly as good as the Panthers’. Hurts is going to find himself under pressure most of the game and the running lanes will close down much faster. I see sacks and possible fumbles in Jalen’s near future.

The one concern I had for the Panthers is the status Christian McCaffrey who is listed as questionable for Sunday’s game. There are reports now out suggesting he will likely play in this game which is great news for CAR as he is the cornerstone of this entire offence.

This line opened at (-4) and I was buying at (-3.5). As I write this, the line has inexplicably moved down to (-3) possibly on some injury news. Carolina is the correct side here regardless if McCaffrey plays or not, it is just a big bonus if he does.

This game is a stanky dog and you may have to hold your nose to get this wager down. Although the Packers are 3-1, they have not impressed me enough to suggest they are Super Bowl contenders this year. They are just too average in too many areas (except perhaps QB) for them to be considered contenders. Even Rodgers’ numbers are trending downwards from last year.

As for the Bengals, that is pretty much what they are this season, ‘average’. But average is is actually a notable improvement over last season. Joe Burrow in particular has seen his numbers move up sharply in his second season. The number one pick overall in 2020 has improved his completion percentage from 65% to 73% and his YPP from 6.7 to 9.2. That is a huge improvement in just one season and are numbers that are actually better than Rodger’s.

These teams are very close and getting three points at home in what should be a very close game is just too good to pass up. Get over any bias you may have of the Packers being the better team in this matchup, and get down on the correct side.

The Texans are terrible. But the Patriots just do not score enough points to be favoured by 9 points on the road against anyone this season. Mac Jones has been given the job of game management for the Patriots offence this season and for the most part has done a decent job of doing just that. But what the Patriots sacrifice in return for this conservative game plan is an explosive style offence capable of blowing out weaker opposition.

That is how I see this game playing out with the game being close in the first half and the Patriots pulling ahead in the third quarter. The should hold on for the victory, but covering this 9 points may be difficult. They just do not have that killer instinct to put an opposition away early.

Maybe I’ll be wrong on this one and it will be a 34-7 blowout. But I think taking the points on the bad team at home is the better play.

These are just my picks for the early games of week 5. I am preparing several big plays for the afternoon games as well, so make sure check back on my Daily Picks page for my late releases.