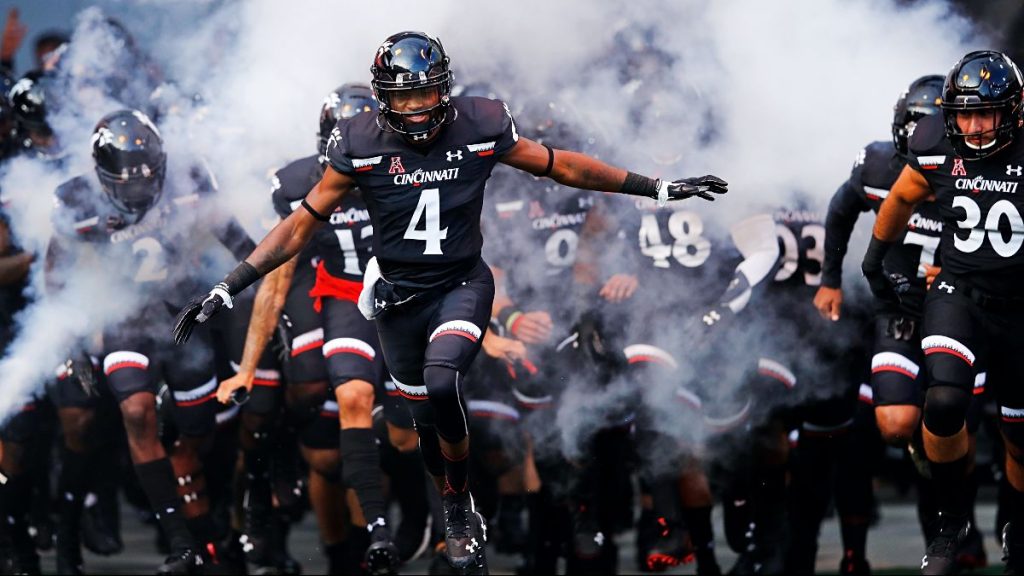 I’ve been waiting for this game for weeks. It is Super Bowl time in Cincinnati and they even had a traditional two weeks off to prepare. This game represent the biggest remaining hurdle for the Bearcats becoming the first non power five team to make the FBS playoff. They had a big win in Indiana two weeks ago and normally a let down could be expected, but I do not seen that happening here with the extra week to prepare and the magnitude of this game.

While the Bearcats were preparing for this game, Notre Dame was playing a huge game at Soldier field against the Badgers. The Irish got every conceivable fortunate bounce in this game as the actual play was for closer than 41-13 score. Notre Dame rushed for a total of 9 yards on 32 attempts. This is a stat that is so bad that I had to go back a check it again to make sure it was correct. It is nearly unfathomable to me that they managed to score 41 points on just 9 yards rushing.  Notre Dame did not win this game as much as it was handed to them on a silver platter by the Badgers.

This week they face an even tougher run defence in Cincinnati than they saw last week, so I do not expect a major improvement. They certainly cannot expect to score 21 points on defence/specialty-teams every week in order to keep winning. Their week 1 OT win over a terrible Florida St team is now looking like a poor performance, not a quality win. Oh and let’s not forget the near disaster they had at home against Toledo where they needed a last minute TD to win that game. The Fighting Irish are not a team that I want to be laying my money on.

In contrast, this Cincinnati team still one of the most disrespected teams in NCAAF due to a perceived lack of quality schedule. This is certainly a top 10 team in the nation and a strong argument could be made for top 5, but I could easily name 20+ teams that I would rank ahead of ND. I’m on the Bearcats to get it done in their biggest non bowl game in program history making it a double play.

This a Friday night game so I want to make sure it was on the early ticket. It is a national spotlight game which usually favours the home team.

My numbers have the Terrapins as the slightly better team in this matchup, but it is very close. They both have a common opponent this season as well in Kent St with both teams beating the ‘Golden Flashes’ by 23 points.

Iowa has been a bit fortunate so far this season to still be undefeated. In the Iowa St game in particular they were plus 4 in the turnover advantage and it is pretty difficult to lose a game with that stat. Overall the Hawkeyes are a bit over rated and they certainly are not the 5th best team in NCAAF.

The difference in this game could very well come down to the QB matchup and this is were the Terrapins hold their biggest advantage. Little Tua, yes the younger brother of the Dolphins QB, is exceeding all exceptions of him and had a fantastic start to this season. He has certainly played better than Spencer Petras for Iowa. I like Maryland to move the ball enough to get the SU win in this matchup, so I’m pretty happy getting the (+3.5) bonus points.

The Razorback have been the biggest surprise of this NCAAF season so far. They already have two big wins against Texas and Texas A&M and still have their sights set on the SEC Championship game. They are currently ranked 8th, but you easily argue this should be higher and specifically I would rate them ahead of Iowa and perhaps Oklahoma. Frankly I just do not think this team should be 18.5 point underdogs to anyone, perhaps not even the New York Jets.

The Bulldogs could be the best team in the nation, but that remains to be seen as the season progresses. Georgia should certainly should be favoured in this matchup, but I would have put the line closer to the 10-13 point range.

The Razorbacks should be able to put up 13-17 points even against this extremely tough Bulldog defence. That means Georgia will need to score 34+ to get this cover and I just think that is tough much to ask against this Arkansas defence that almost as good. I see it being a slow paced game with both teams attempting to dominate the other with a ground attack, which further inflates the value of this point spread. I like Georgia to win but not get the cover.

This will be the Penn St ‘stripe out’ game, which I guess is different than a ‘white out’. What I do know is the Nittany Lions enjoy possibly the biggest home field advantage in NCAAF and I’m all in favour of that.

Michael Penix has been nothing short of bad this season. The third year had a lot Hoosiers hopeful for this football season, but it does seem as if he has started regressing. He has just 4 TDs and 6 INTs with a 55% completion, which just isn’t going to cut it in these hostile playing environments that are BIG 10 road games.

The Lions have a top 5 defence in NCAAF and I see them getting home for sacks and multiple turnovers in this matchup. In a small sample size, turnovers can be just a random variable that can wreak havoc on points spreads. But we have enough data now that we can start to predict such things and I do not like the efficiency of this Hoosier offence.

Penn St may need just 27-30 points to cover this big spread and I like them to do just that while capitalizing on a field position advantage.