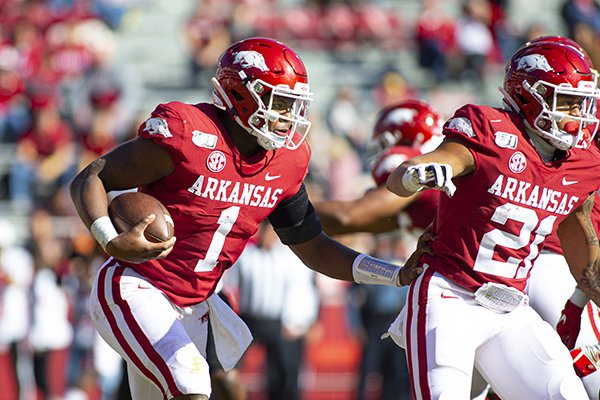 Please note this is a neutral site game at AT&T stadium in Dallas.

This matchup pits strength against strength as the Razorbacks will attempt to run the ball against the tough Aggies front line. Which ever team wins this battle, is likely to win this game.

The Razorbacks have one of the best rushing attacks in the NCAAF with 849 yards and a 6.1 YPG in their first three games this season. They are doing it with a running back committee as well, not just with a single dominant running back. Even QB KJ Jefferson has 180 yards rushing on 24 carries. Frankly I do not see how any defence is going to find success stopping this ground attack (except perhaps except Georgia next week).

In their week 2 game against Colorado, the Buffaloes put up 171 yards rushing and nearly pulled off the upset. That makes me think the Razorbacks could put up another 250 yards or more on the ground a really dominate this game. The slower pace could also make the extra 5.5 point even more valuable in this matchup as we don’t even need to win SU.

If the Aggies are able to score early this game may get out of hand because I am not confident Arkansas have the fire power to come from behind. I do like them to keep it close however or perhaps even get the SU upset in this matchup and I will make it a double play.

This is another style matchup game where the Bulldogs will attempt to throw the ball successfully to put up a bunch of points to win the game. QB Will Rogers has looked good so far this season for the Bulldogs with a 75% completion percentage and a 8/1 TD INT ratio.

LSU was exposed in their week 1 matchup against UCLA as being unable to stop the Bruins run attack. The strength of the LSU defence is actually their secondary and blitz scheming. To me, this sets up favourably for the Tigers to get pressure on Will Rogers and potentially get some key 3rd down stops or even a couple turnovers.

The wild card in this matchup may be the LSU offence which has a lot of talent, but suffers from inconsistency. If they are able to find a good rhythm, there is no reason why they couldn’t put up 35 or more points and get the victory that way.

Mississippi St won this game last year in the shortened NCAAF season, but overall LSU is a much better program. The pressure is going to be on this team to get this win because a loss would be devastating to their entire season. With the remaining LSU schedule that includes 6 currently ranked opponents, they cannot afford to lose this game if they expect to challenge in the SEC this season. I expect continued improvement from the Tigers and for them to get this win.

This game will be played at Soldier Field in Chicago.

Notre Dame may be the most over-rated team in NCAAF right now. Despite their 3-0 record, they certainly are not the 12th best team in the nation as the quality of their competition has to be serious questioned. Their best result so far was a close game against FSU, which doesn’t appear to be a quality win.

The Irish are going to struggle running the ball and score points in this matchup. Their most likely path to victory would be to win the turnover battle, likely by a differential of more than one. That is precisely how Penn St managed to win in Madison (3-0) so it certainly is possible.

But pay no attention to the rating before these team names, Wisconsin is clearly the better team in this matchup. I see them winning this win a high percentage of the time. There are many scenarios where ND is able to keep this game close, but the Badgers getting a multi-score victory or even a blow out is also very possible even probable.

Be sure to check back here on my Daily Picks page for all your NFL, NCAAF and CFL picks every week for free. I will be releasing my late NCAAF picks either Friday night or Saturday morning. I had a big week last Saturday going 7-2 and I am 11-6 overall this NCAAF season.