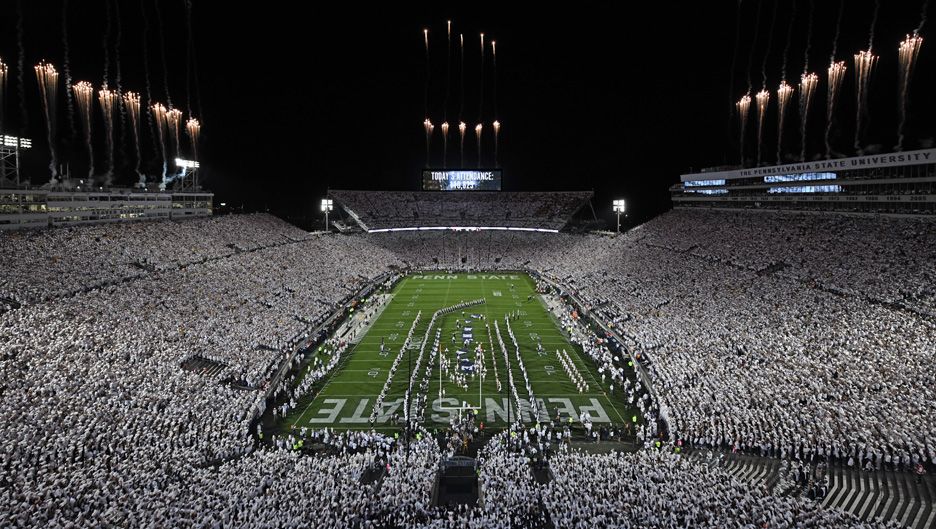 It is the the Penn State “White Out Game” for the Nittany Lions this week against the Tigers of Auburn.

Auburn travels to the Big 10 for the first time since forever having picked up big wins in their first two games against two inferior teams in Akron and Alabama St. Their first real game is going to be a big test having to face the tough Penn State defence on hostile ground. Auburn is also a team that has not traditionally travelled well, so they could struggle.

Auburn is used to big road games playing in the SEC West, but this will be a big test even for them facing the 10th ranked team in the nation. We still do not really know how good the Tigers are this year as they still have yet to face a quality team. Their two blow out wins however, can only serve to generate an overly optimistic outlook for them from the general betting public.

The Lions did get a very impressive win in week 1 against Wisconsin, so this team has already been tested and passed a big test. Third year starter, Sean Clifford has been solid thus far this season doing just enough to beat the Badgers and take care of Ball State convincingly. He does not need to win the game for the Lions, rather just not lose it. I expect the Lions defence and the fanatic crowd to limit the Tiger’s point total in this game.

The Golden Gophers played well enough to win against Ohio State in week 1 but several long TDs burnt the defence and was the difference in that game. Minnesota ran the ball effectively in that game behind Mohamed Ibrahim before he was injured. Ibrahim is expected to be out again for this matchup, but the quality offensive line should still allow the Gophers to run the ball effective against Colorado.

The Colorado Buffaloes nearly pulled off the big upset against Texas A&M last week. That quality effort is really the reason this line is not flipped with Minnesota being the favourite. I expect a small let down from the Buffaloes and also a potential look ahead with a big divisional matchup against ASU on deck for them next week.

I like the Gophers to win this game straight up, so if your bookie is offering only 2.5 points, consider the money line bet instead.

This is a huge sandwich game for Stanford after a major upset of their rivals in USC as 17 point dogs. On deck, they have their second biggest game of the year at home against UCLA. It should be easy to see that they could experience both a let down after a big win, and a look ahead against a divisional rival.

The schedule was further unkind to the Cardinal after having to travel to Dallas to play their first ‘home game’ against KSU. They will not open up their home field until next week but first have to make a side trip to Tennessee. This may be one of the best NCAAF scheduling plays we see all season and we are getting 12 points for a live home dog.

Vanderbilt won a highly emotional game last week against Colorado St and the Commodores may just end up winning this game straight up, so I’m loving the big spread.

I have a couple of ugly dogs to round out this ticket. The Georgia Bulldogs are likely the second best team in NCAAF lead a punishing defence that has yet to allow TD this season. But this 31.5 point line seems at bit stretched to me. It is still a divisional rival and they are on the road. The Bulldog offence has not yet proven they can cover such big spreads and they may not even score 32 points. They did manage 56 points against UAB, but South Carolina should put up a better game than the Blazers and that spread was only -22.5.

I’m not delusional enough to think the Gamecocks could actually win this game SU, but they could keep it close. They will attempt to slow this game to a snail pace and run the clock down at every opportunity. If they can manage just 10-13 points on offence, they should have a good chance to cover this big spread.

Everyone loves to hate on the Corn Huskers right now especially after their Week 0 implosion against Illinois. They did put up a couple of better efforts against Fordham and Buffalo, but this will clearly be their biggest test of the season so far against the number 3 NCAAF ranked Sooners. This is another example of a line that does seem to have gotten a little stretched.

I still question the coaching and team leadership of this team behind Scott Frost. But this is the kind of game that should be able to cover. It is the games against more evenly matched teams that I will be looking to fade Nebraska this season. The Sooners may not rate this out of conference Nebraska game highly on their season schedule and the potential for them to overlook this team is a possibility as well.

Those a couple of ugly dogs to round out this ticket. I’m going to just close my eyes and hope for the best.

Last week I went 3-3 on my NCAAF plays while missing both sides of the Ohio St loss. Buckeyes were clearly the wrong pick, but I was unlucky to miss the OVER by just a half point. Quality wins with Pitt, Michigan and Arkansas rounded out the week 2 selections. Make sure you check back here everyday for my Daily Picks for all your football selections including late games selections on Saturday and Sunday mornings.