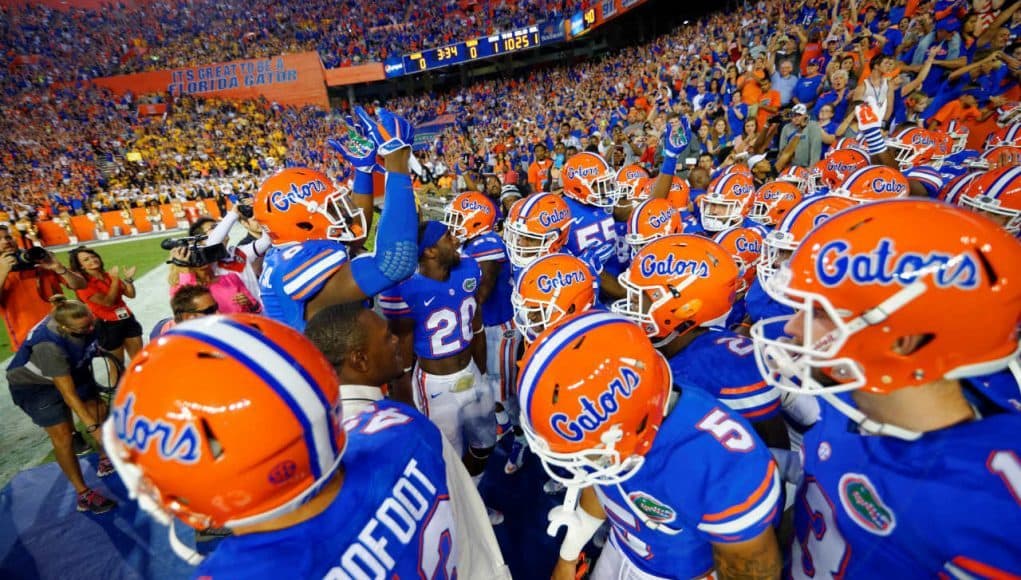 I generally do not like laying big numbers such as this, but in this matchup I feel compelled to do so. The Gators lost a really close game to BAMA last week, and could have easily won if not for a couple key plays including a missed extra point.

The difference in this matchup will be the massive edge Florida has in the running the ball. Gators put up 245 rushing yards against a BAMA defence which is top 5 in NCAAF. They should run the ball at will in this matchup against a weak TENN defence and easily score 42+ points.

That means TENN will need to score three touchdowns or more to get this cover and I just do not see how they can accomplish this. Running the ball against the Gators who held BAMA to just 93 yards despite trailing the entire game, is a big ask and should result many three and outs for the Vols. TENN also takes to the road for their first conference game of the season and could very reasonably experience culture shock at the swamp and be overwhelmed by the next level talent on the other side of the field.

I do not see a let up situation here for Florida either, if anything they will come out with even more confidence knowing they can compete with anyone in the nation. They will clearly have their sites now set on Georgia and ultimately a rematch against BAMA in the SEC conference game. But they need to first take care of their own business and I expect them to do just that in a blow out. I will take this take this as a double bet and my play of the week.

Florida St simply cannot be as bad as the general betting public thinks after three consecutive losses to open the season. I’m not sure what this line would have been at the beginning of the season, but the Seminoles would surely have been the favourites. That is a huge over-reaction to the perceived poor play of Florida St.

The Seminoles simply cannot afford to lose this game and fall to 0-4 as that would be a giant setback to this program. I expect maximum effect by this team and for them to pick up their first win.

Baylor is 3-0 to start this season but have yet to play a quality team and this will be their first real test of the Season. Just as I previously stated that Florida St cannot be a bad as people think, the Bears are not as good as their three easy wins would suggest.

The Cyclones bounced back as they should have against UNLV last week, but this is a team that is still trying to prove they aren’t as bad as that game against Iowa suggested. I feel the Cyclones simply choked on the big stage in their biggest game of the year, giving up multiple turnovers that cost them the win against the rival Hawkeyes. This is a game where the pressure is off just slightly and they should be more focused and at ease to get the job done.

The Gamecocks lost a tough game to Georgia last week 40-13. They did however, mange to cover the 31.5 point spread and the 13 points was the most the Bulldogs have allowed so far this season. I was on the Gamecocks last week and I am going to back them again this Saturday.

A theme for the week is starting to emerge as I am once again fading a 3-0 as the public opinion is just a little too bloated for this Wildcat team. None of their three victories so far can really be considered quality wins.

Winning road games in the SEC is a tough thing to do and covering as road favourites is even tougher. This game should be closer to a pick’em in my opinion and S Carolina could easily pick up a SU win.

The Bruins lost a heart breaker against a tough Fresno State team last week and I expect them to have a rebound effort this week against a weaker Stanford team. This is a similar situation to the Florida game where a really difficult loss the week before should result in an even better effort the following week.

I feel Stanford’s stock is a little bloated as well. They got a nice win against USC as 17 point dogs, but really the Trojans gave that game away more than anything. The Bruins should get an easy win here.

Be sure to check back here on my Daily Picks page for all your NFL, NCAAF and CFL picks every week for free. I will be releasing my late NFL picks either Saturday night.