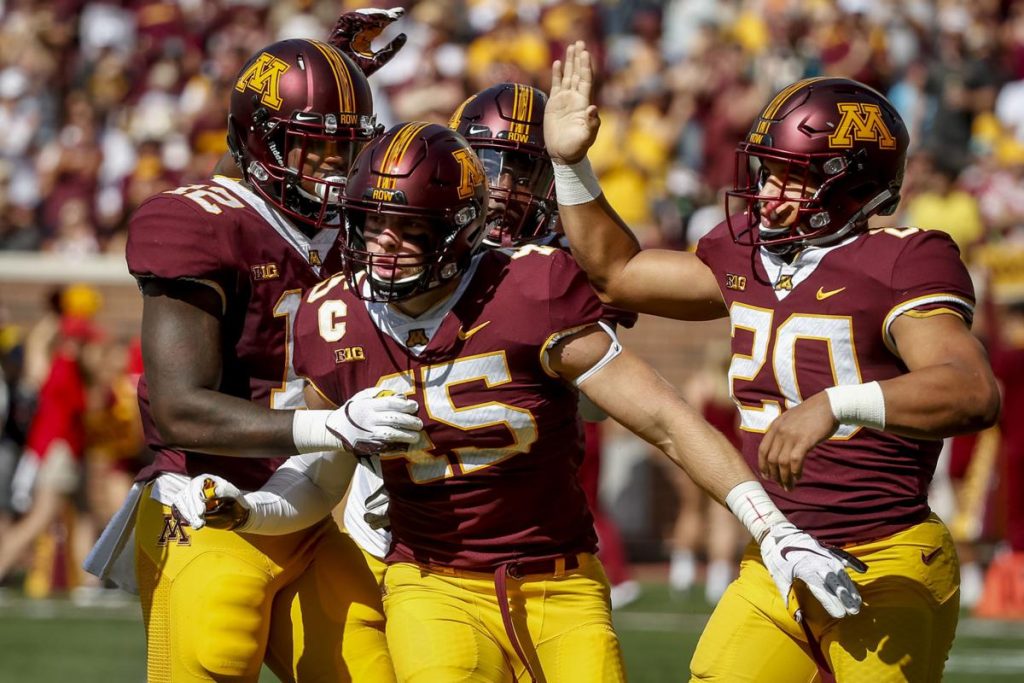 Nebraska lost their opening game against Illinois, but since showed steady and impressive improvement over the next month while playing several close games against some tough opponents. Their 3-4 record SU does not reflect the quality of this team and many bettors are becoming aware of this. Having giving Scott Frost and the Corn Huskers their due, this line has gotten out of hand and seems inflated.

This line is an over-reaction and I do not feel Nebraska should be favourites on the road in Minnesota as the Gophers are a good team with a balanced offence. The offensive numbers for both these teams are very close with each rushing for over 200 yards per game. On the defensive side I would even give the Gophers a slight edge. In particular they may be able to slow down the Nebraska rushing attack and take control of this game.

This will be another tough conference road game for Nebraska and the Gophers simply are not going to care their opponent ALMOST beat Oklahoma, MICH and Mich St. As well as the Corn Husker have played this season, I see them falling two games below .500 after this game.

There hasn’t been a more disappointing team in NCAAF this season than the Clemson Tigers. They are 3-2 SU and horrific 0-5 ATS. The real question is have the lines makers fully adjusted for how bad this team has been already this season? My answer surely is not yet.

Despite the Tigers horrible start to the season, they still find themselves as 14 point road favourites this week in a conference matchup. This is a team that is only averaging 21 points per game and they are being asked to lay 14 point on the road? They are also a team whose season’s goal of reaching the NCAAF playoff is already burst and they are really playing out the string just mid way through the season. Motivation for this team could be a problem down the stretch.

Syracuse played and excellent game last week losing to Wake Forrest in OT and will be disappointed they didn’t win. They should be full of confidence playing at home again this week with the opportunity for a huge upset over the conference bully. The Orangeman should keep this game close and may even pull off the upset. Give me one bet with the points and another small wager on the ML.

This is almost a pure fade of LSU. At the point of the season, Ed Orgeron has lost the confidence of his team and his tenure as head coach of the LSU Tigers is quickly coming to an end. If this team was going to rally around its coach, it certainly would have been last week at the latest. We simply have to conclude this current version of LSU is a bottom feeder in the SEC West, and we need to adjust accordingly.

The best this team could really hope for is 6-6 record and a lower bowl appearance. They have a game a game left against UL Monroe, but there are nothing but currently ranked teams on LSU’s remaining NCAAF schedule so I don’t see them getting to 6 wins. When I bet against them last week, I stated that I was ready to fade this team the remainder of the season and I am still prepared to do so.

The Gators are still a top 10 team despite their two loses, so I expect them to take advantage of the opportunity to spank an old rival on their own soil. Laying (-10.5) point in Tiger Stadium is not normally something I would want to do, but this season is different and perhaps an outlier. I’ll lay the points against the team that is tanking for their coach.

Make sure to check my Daily Picks frequently as I will be releasing more NCAAF picks this week for the afternoon and late night games. My weekly NFL best bets will be released soon as well where I am currently 29-22 (56.9%) for the season.