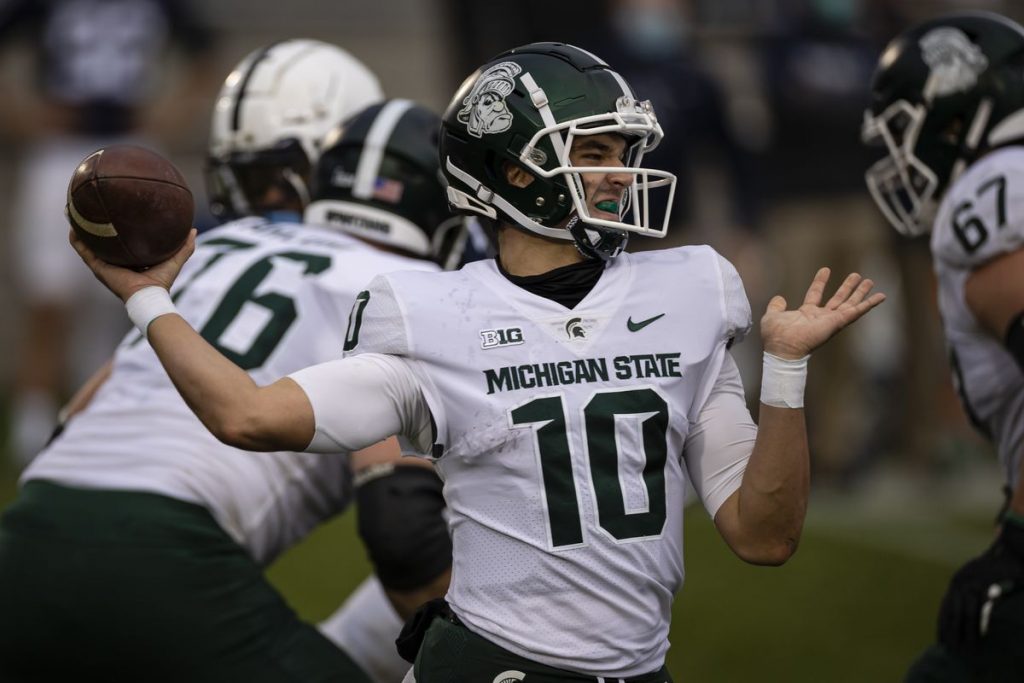 My first impressions of this game was the Michigan St should get an easy win, but then I began to look more closely. The Spartans do not have a quality win yet this season despite their 6-0 record. The are beneficiaries of a very soft schedule so far with wins over bad teams such as Miami, N Western & Rutgers. Their best win was against Nebraska at home, but really they were badly outplayed in that game and should have lost. Public opinion of the Spartans will not be any higher right now than it will be all season.

Indiana, in contrast, has had everything go wrong for them this season. They lost three games against 3 of the top 5 rated defences in NCAFF, Iowa, Penn St, and Cincinnati. That is a horribly tough schedule and frankly the Hoosiers will glad to get a relatively weak opponent at home this week in Michigan St. Indiana has even had a week off to prepare for this game so I expect a refocused and more motivated group.

The Hoosier’s biggest problem this year has been turnovers as Michael Penix has thrown 7 INTs already this season. The reports are out that Penix is questionable for this game, but even if he is healthy, we may see backup Jack Tuttle under center which I do not see as a negative.

I am concerned about the Spartans drinking too much of their own Kool-aid and believing they are better than they are. They have a huge game game scheduled for next week at home against the Wolverines, so they could be over-looking this tough road game.

The line for this game if set pre-season would have been in the neighbourhood of Indiana 6-7 point favourites. That is a massive line movement in just a half season of play. I think it is an over-reaction and the matchup should really be closer to a pick’em.

Kenny Pickett has been lighting college football defences up this season. His numbers are off the chart mid way through this season and everyone should be learning this guy’s name because he is likely to be in the NFL next season. Through 5 games he has 19 TDs and only one 1 INT and a 72% completion rate.

Pitt did drop a close game to W. Michigan otherwise they would be the clear favourite to win the ACC title. They solidly beat what is now a quality TENN team in Week 1 and trounced Georgia Tech last week. I am just high on the Panthers and I don’t feel this line is high enough so I am going to ride this team until they give me reason not to.

The Colorado Buffaloes are not a good football team and I do not see why they should be favoured by 6 points over any team in the PAC12. Their best performance this season was a 10-7 loss against Texas A&M who simply came put flat that day. Other than that game, they have been really bad.

In my NFL Picks this week, I am already picking two winless teams (Jaguars & Lions) to get their first victories of the season so I may as well pick a winless NCAAF team to win as well. I feel the Wildcats are the least bad team in this matchup and the certainly have faced the tougher schedule than Colorado.

These are still two bad teams so I certainly will not be watching this game, but I still hope to cash this ticket.

Be sure to check my Daily Picks page regularly for all my free NCAAF/NFL picks. I will be releasing one more ticket for the late NCAAF games and another NFL ticket tomorrow.