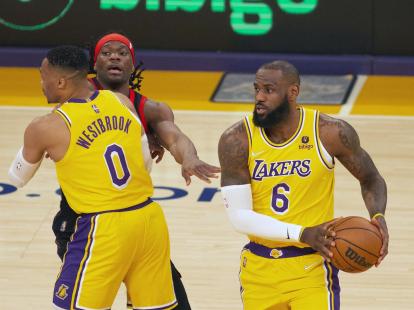 I have an NBA Best Bet ready to be released tonight one hour prior to tip-off. My NBA Best Bets are 21-10 (67.7%) but you need to be subscribed to my Newsletter in order to receive the selections by 1 pm EST. Yesterday I hit with the Pacers trouncing the Blazers 129-98.

The Lakers come up with a big upset in Toronto on Friday night. LeBron James was his usual dominant self but Russell Westbrook was the story of the game. Rus had a triple-double and forced a steal on the final play of regulation running the court to hit the game-tying trey. I know, I was shocked too! If that is what it takes for the Lakers to get a victory, I’ll keep betting against them.

The very next night, the Lakers stunk out the joint in Washington. Tonight, LeBron travels back home to Cleveland to face the younger and more talented Cavaliers. Even if LBJ has a huge game, there is no guarantee the Lakers can win. LA has too many holes and is too inconsistent to be considered serious contenders. I’ll take my chances with the much better team.

The Raptors are very much the better team in this matchup.

After a nice winning streak to start the season, the Bulls have been very average since. The Raptors have done the opposite with their slow start but coming on strong in the second half. Which team would you rather bet on? This is a pivotal game for both these teams as a Raptor win would put them just a half-game behind the Bulls for the highly coveted 6th spot in the eastern conference standings.

The Raptors have been road warriors all season with a 23-15 record outside Canada including 6 in a row. They even got a win in Philadelphia last night so winning in Chicago shouldn’t be more difficult than that. I’ll take the Raptors straight up and may even look at a money line bet at (+145).

The Washington Wizards have no business being five-point road favourites against any team in the NBA. I still have them sitting last in the eastern conference in my power ratings and only currently ahead of POR and OKC. I am not sure if they are even the better team in this matchup.

I’m not a big fan of the Rockets either. In fact, I do not have a winning selection on Houston this entire season. Perhaps this game will be the first. If they cannot win this game, It will be next season before I pick them again.