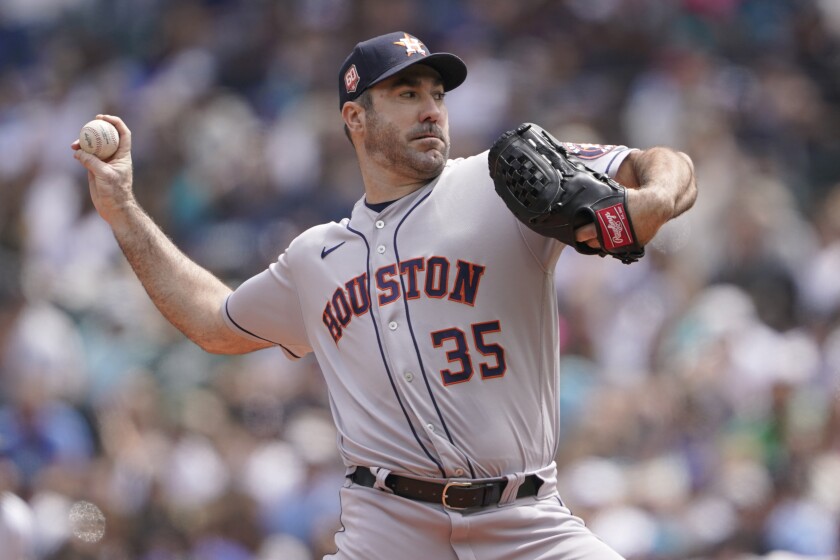 All 15 teams were in action yesterday including one double hitter as the second half of the season is now in full swing.

The Houston Astros are now staking their claim as the best team in the American League with another playoff-style win in Seattle. The Astros are now just 1.5 games behind the Yankees in the standings, but they are clearly the team to beat at this point of the season.

Justin Verlander is the man no team wants to face in an elimination game and he makes the Astros the favourite to represent the American League once again this year for the World Series. Justin became MLB’s first 13-game winner going 7 strong innings with just one run and 9 KOs in the 3-1 victory.

After winning 14 consecutive games, the Mariners have now dropped two in a row to Houston at home and look to avoid the sweep today.

Gerrit Cole got tagged with just his 3rd loss of the season when he, and his bullpen, could not hold a three-run lead. New York waisted a four-hit performance from Aaron Judge going just 1 of 14 with runners in scoring position. This lack of clutch batting for the Yankees has been the key ingredient missing during their current 4-8 mid-season slump.

Ramon Urias put the O’s ahead for good in the 7th inning with a 2-run HR. The inspiring Orioles remain determined to stay relevant and above 500 in the tough American League East.

Red Sox lose 4th straight as they sink towards 500

The Boston Red Sox continued their recent run of dismal play dropping another game to the Blue Jays. One has to question if Boston can rebound from the 28-run thrashing they received Friday night. The Red Sox are now 3 games behind Seattle in the American League wild-card race and they are in danger of dropping to 500 if they lose again today.

Alek Manoah was sharp on the mound four the Jays going 6 innings with just one run and 7 KOs to pick up his 11th win of the season.

Both the Guardians and White Sox continue their struggles to remain relevant and within striking distance of the Twins in the American League Central. Cleveland drops to 2 games behind Minnesota with the split and Chicago is now 4 games back.

The Guardian picked up their 5th in a row with a 7-2 win in the first game. Chicago hung on for a critical 5-4 victory in game 2 keeping them close in the standings.

The Athletics beat the Ranger 3-1 for their third straight victory. Still, nobody was watching. If they can finish the sweep of the Rangers today, I may start paying attention to the A’s.

The Detroit Tigers continued their uninspiring play dropping another game this time 8-4 to the Twins. With the Royals and A’s playing better of late, the Tigers seem like favourites to claim the last spot in the American League standings by season end.

The Angels lost another game in embarrassing fashion, 7-2 in Atlanta for their 5th straight loss.

I picked up another winning day in MLB yesterday with the Blue Jays winning again and the total in Seattle. But the Guardians could not find a win as dogs in the nightcap of their double hitter in Chicago.

Heading across the pond to London, I had a couple of best bets live on the UFC Fight Night card. Paddy ‘the Baddy’ Pimblett was entertaining and inspiring as always. Paddy picked up another finish with a nice display of grappling control and a sweet choke with an arm-in body lock. Tom Aspinall was not as fortunate. Tom suffered a knee injury just 15 seconds into the fight collapsing in agony. I had a three-star premium bet on this fight so it dropped me down to a losing day despite winning 3 out 5 of my bets.

The LA Angels are in freefall. They have lost 5 games in a row scoring only 7 runs in those 5 games. In total, they have dropped 14 of their last 16. Every team has losing streaks through the course of a season, but it is the way a team loses to which I prefer to pay attention. The coaching staff has lost this team and when this happens to any professional team, the lines cannot be wide enough to stop me from betting against them.

It gets worse for the Angels today as they face one of the best and hottest teams in MLB and defending champs, the Atlanta Braves. The Angels actually have a starting pitching advantage in this matchup otherwise this line would surely be north of (-300). I will be looking for any excuse to bet against the Angels in the near future until they can show any signs of life.

The Orioles pulled off an inspiring comeback win against the Yankees last night. The Yankees just do not seem like the same dominant team we saw in the first half of the season. Perhaps with such a big lead in the American League East, they have taken the foot off the gas a little. Maybe they were a little lucky to start the season as well. Regardless, very few MLB are able to win more than 60% of their road games which is what the linemakers are asking from them today.

The Orioles clearly are not as talented as the Yankees, but they are playing with grit and determination which makes them dangerous. I think they are good enough to win this matchup more than 40% of the time to make this bet profitable. The value here is clearly in favour of Baltimore.