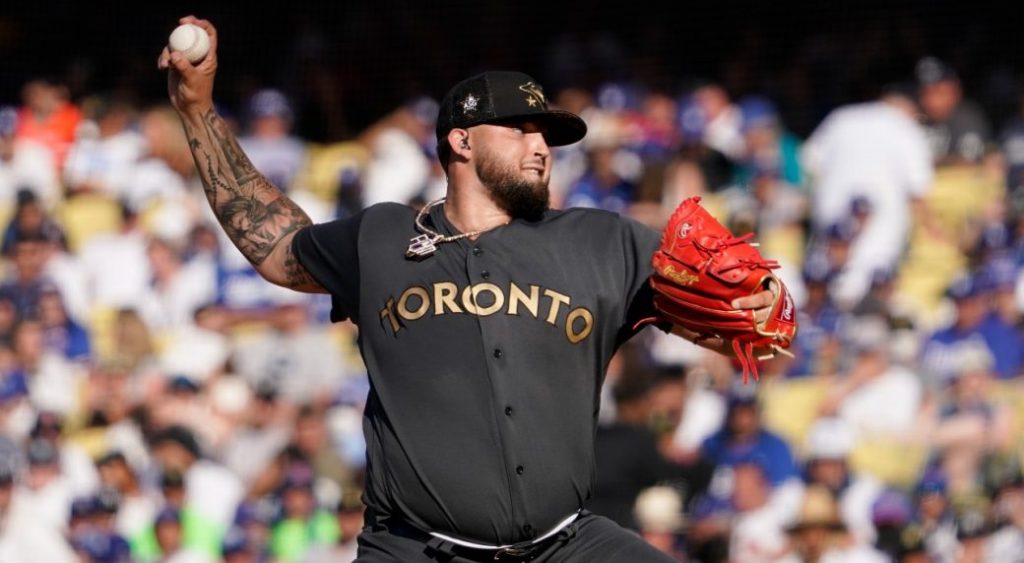 The Toronto Blue Jays look to their ace in their rotation, Alek Manoah, to stop their currently losing as they desperately hang on to a wild card spot in the American League. The Blue Jays currently sit tied with Tampa Bay and are now a half-game behind Seattle in what is essentially a three-way tie at the top of the wild card race. The problem is now the surging Baltimore Orioles who are just 1.5 games behind the group and are looking to take away one of those spots.

If the Blue Jays cannot find at least a split of the remaining two games of this series, they will find themselves looking up at the Orioles in the standings and out of a playoff spot. Manoah brings his impressive 12-5 record into the matchup looking to keep the Orioles at bay. The 24-year-old all-star has been the most reliable pitcher for Toronto this season with his 2.54 ERA and 1.02 WHIP. The Blue Jays will need him at his best today to carry momentum into an even more important 4-game series in Yankees Stadium this weekend.

The Baltimore Orioles have been absolute lightning rods this season after finishing with just 52 wins last year. They play an enthusiastic and inspiring style of play led by a youthful group of players. They play good defence and hustle on the bases.

The Orioles’ front were sellers at the trade deadline, despite the team’s unexpected success. They let fan favourite Trey Mancini go to the Astros for prospects which could not be seen as a vote of confidence by the players. But they remain undeterred and hell-bent on proving all critics wrong by finding the way into the playoff tournament this season. As a baseball fan, I hope they do it.

On paper, this matchup does look like a mismatch. But do not ask the Orioles about the odds this season. They have shown flagrant disregard for the betting lines this season and anyone who was brave enough to back them was richly rewarded.

The Rangers picked up a rare win in a one-run game yesterday against the Athletics. But the Astros could not get it done in Chicago leaving me with a split yesterday.

What is going on with the Yankees right now? They are just 8-15 since the all-star break and look just a shell of the team we saw in the first half. There was even some premature talk about them potentially reaching the 116-win mark for most wins in a season. That certainly will not happen now and really they are a little fortunate that no other team in the American League East has mounted a charge at their hold on first place. They still have a 10-game lead over Toronto and Tampa Bay who have each been treading water and unable to gain much ground.

The key difference in the second has been, as is often the case in such scenarios, injuries. The Yankees have been hit hard with an injury list which includes Matt Carpenter, Giancarlo Stanton, and now also DJ LeMahieu. Perhaps the team was a little complacent with the big lead, but I doubt that is the situation any longer. They have conceded the top spot overall to the Astros and are no longer the favourites to win the American League pennant.

The Rays have not exactly been lighting the scoreboard up lately either, but they did already shut out the Yankees last night 4-0 in the first game of this series. Jeffery Springs goes tonight for the Rays who has been very consistent with a low 2.56 ERA this season. I think you have to look at the value for the underdogs in this spot.

I am going to overlook the current 9-game losing streak put up by Oakland in this spot to focus on what should be a very favourable pitching matchup.

Rookie JP Sears makes his second start for Oakland this season after being acquired from the Yankees at the deadline. His numbers in his first season are remarkably good albeit in only 27 innings of work. A 2.30 ERA and 0.80 WHIP would be considered good by anyone’s standards let alone a rookie.

Kohei Arihara makes his first start in the major leagues this season for the Rangers. The 30-year Japanese sophomore had a difficult first year pitching in North America putting up unflattering numbers in 10 starts. He is a bit of a wild card today as he still has potential, but he could also really blow up as well.

The Rangers are the better team here, but I will take my chances with the more consistent pitching matchup and the underdog price.