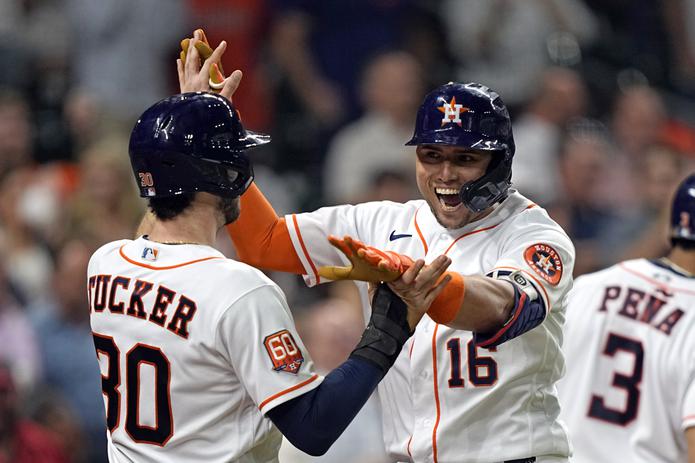 The Astros drew even last night with the Yankees after their come-from-behind victory over their cross-state rivals from Arlington. Aledmys Díaz hit a grand slam in the 4th inning tied the game at four. The loss was notable for Ranger’s starter who had a 9-game winning streak snapped that dated back to April 17th. The strong Astros bullpen once again proved to be the difference shutting down the Ranger’s bats for the final three innings to close out the victory.

The Astros and Yankees each sport identical 71-40 records on the season, but Houston won the head-to-head series this year already 5-2 over New York, giving them the tiebreaker. The Yankees suffered a disheartening loss to the Mariners last night 1-0 in 13 innings. Considering the injuries and recent poor play of the Yankees, Houston is the clear favourite to win their 4th American League pennant in six years.

Justin Verlander looks for his American League leading 16th win of the season tonight at Minute Made park against the Rangers. He faces Glenn Otto for the Rangers and this game is a huge mismatch on paper with Verlander and the Astros listed as (-300) to win. If you don’t like laying that much juice, you can also take Houston at (-2) runs on a pick’em a line.

I got skunked yesterday on a pair of plays. I had the Rangers (+1.5) and that was looking really good after Bubba Thompson hit a home run to make it 7-6 Astros in the top of the 9th. But the call was changed to a double on review after a fan in the Crawford boxes dropped the ball into the field of play. It was clearly a missed called and cost me a winner. That’s the way this business goes some days.

The other game turned out to be a game of the year candidate with the Mariners pulling out a 1-0 victory in 13 innings. Gerrit Cole pitched a great game as I predicted but Anthony Castillo matched him the entire way. It was my second 1-0 defeat in the past three days. I can officially declare that I am running badly now.

Touki Toussaint makes his first start of the season for the Angels. His most recent performance was in long relief last week against these same A’s where he gave up 2 runs in 4 innings. Paul Blackburn goes for the Athletics today. The A’s starter has been excellent most of the season, although he did have a shocking start after making his all-star appearance giving up 10 ER in four innings to the Rangers.

The Angels do not have that same kind of firepower so I do not expect a similar type of outing for Blackburn. Despite Oakland’s current four-game losing streak, I still like them better than backing the Angels who rely far too heavily on Shohei Ohtani for everything in a game that is essentially a bullpen start.

Speaking of Ohtani, last night he became the first player in MLB history to have 10 wins, 10 home runs, and 10 stolen bases in a season. That’s something the pudgy Babe Ruth was never going to do.

The New York Yankees are now just 7-12 since the All-Star break. They simply do not seem the same dominant team we enjoyed in the first half of the season. They still have a 10.5-game lead on the Blue Jays in the American League East and I do not expect that to change, but they are not a team exuding confidence right now.

They did make a couple of nice pick-ups at the deadline, but the injuries for New York are now taking a serious toll. Matt Carpenter will be badly missed after leading the American League in OPS for much of the season. Giancarlo Stanton and Anthony Rizzo are two more big bats missing from the lineup that cannot easily be replaced.

The Mariners are just a fun team to watch and are finding new ways to win on an almost nightly basis. Tonight they have reigning American League CY Young winner Robbie Ray taking the mound. Despite all this, the Mariners find themselves as home underdogs tonight. I’ll take that action.