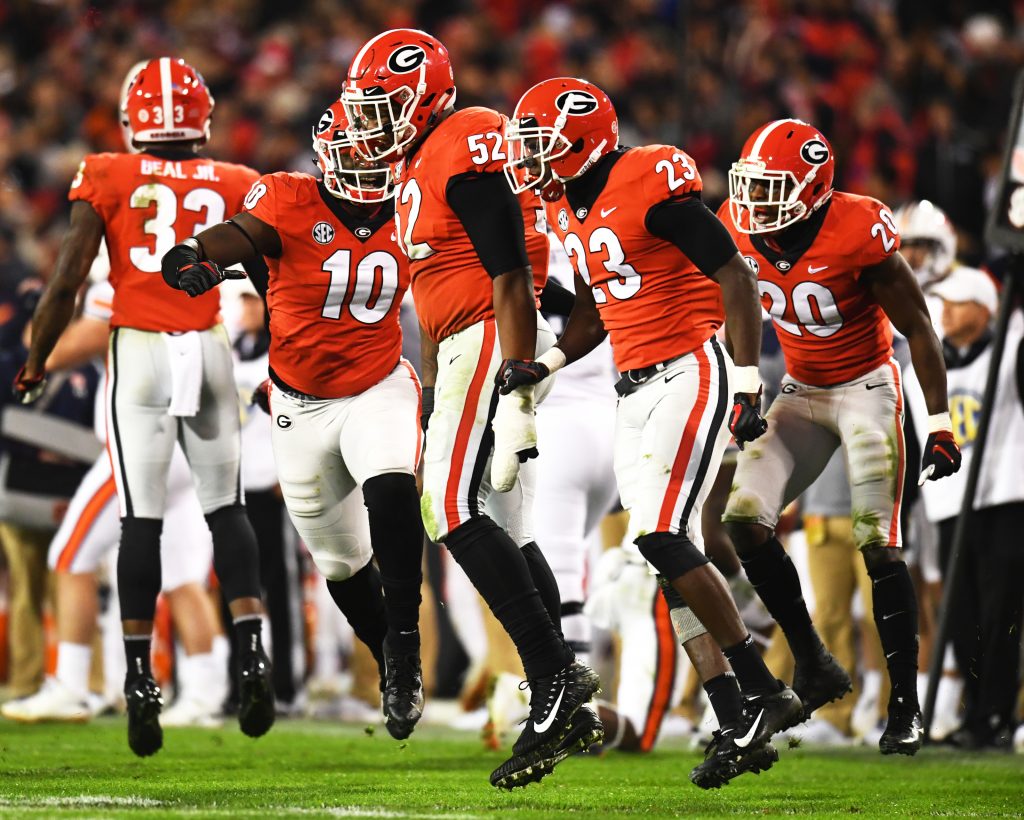 The 2021 NCAAF season kicks off tomorrow and yes, I am excited! Week 1 provides one of the best matchups we are likely to see all season with ACC powerhouse Clemson Tigers facing off against a Georgia Bulldog squad hungry to prove themselves to be NCAAF national title contenders. The game is set as the primetime east coast game in the neutral site of Charlotte.

The Bulldog defensive ‘front 7’ are looking like they may be the best line in NCAAF. It is hard understate how much of an impact a dominant defensive line can influence a football game as it acts as a domino on multiple layers of a game. It is for this reason that I am picking Georgia to win this game outright and to run the table in the SEC East. If this Bulldog defence is a good as they are reporting, they should once again be set to face Alabama in the SEC Championship game.

The Clemson offensive line is going to have their hands full blocking up the middle and preventing pressure on Uiagalelei, which in turn will disrupt the timing passes with their talented receiver squad. Running the ball up the middle will be difficult also, so I expect the Tigers to utilize their speed and use sweeps and misdirection to try to get around the edge and get outside.

I am looking for Georgia to come up with at least one big turnover or a couple big sacks at key moments which should make the difference in the final outcome.

Both teams are highly talented on offence and both should get into the end zone at lest a few times each. JT Daniels returns at QB for the Bulldogs after an excellent 2020 season. He should be even better this year than last, and frankly needs to be in oder for the Bulldogs to reach their full potential.

Georgia do have a few injuries that the media is focusing on, particularly on offence. I am not terribly concerned about it as this will have been already accounted for in the line and the Bulldog do have a deep player pool of which to pull replacements. Getting the field goal bonus will come into play here quite often as this game should be close in the fourth quarter.

It should be a great premier week 1 matchup, regardless of who wins.

Defending NCAAF national champions Alabama open up their season in Atlanta against Miami and is surprisingly the first matchup between these two organizations since 1993. Last year’s version of the Crimson Tide dominated all their opponents in nearly all aspects of the game. They may have been one of the best teams we have seen in the past decade.

It is a new year however, and many stars from last year’s team now fill NFL squads. But Alabama has never had troubles recruiting, so they are once again odds on favourites to defend their title. As good as this team is likely to be, it would be very difficult to argue they could possibly be better than last year’s version. I’m not at saying they are going to be bad, but an 11-1 or even 10-2 season is very possible. They a very tough road game against Texas A&M this year and certainly the SEC championship game is never a gimme.

Miami finished 8-3 last year and certainly look like a program on the rise. They should be very competitive and may even give Georgia a run for their money. I do not really expect the Hurricanes to win this game, but keeping it close is a real possibility.

This line really just seems too high for a Hurricanes team that has the potential to surprise. A slower start for the Tide is also a possibility for a team with a new QB and replacing a crazy number of starters from last year.