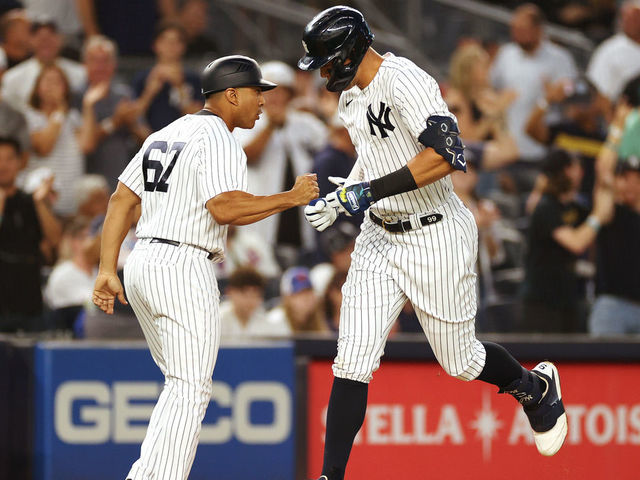 German and Judge shut down Mets

Aaron Judge hit his MLB leading 47th HR and first in his last 10 games to lift the struggling Yankees against their crosstown rivals. Domingo German was strong pitching 6.1 innings allowing just 4 hits and 1 earned run. Jonathan Loaisiga closed the game with 4 outs to earn his first save in over 12 months which garnered a healthy response from the boisterous crowd.

Max Scherzer was self-critical of his performance after allowing 4 earned runs stating the two critical hits he allowed to Andrew Benintendi cost his team the game. The Mets get the opportunity to split the two-game series tonight. They will have to do it without Jacob deGrom on the mound after his scheduled start for tonight was pushed back a couple of days.

Ex-Yankee Jordan Montgomery was masterful pitching possibly the best game of his MLB career in a complete one-hit shut-out of the Cubs. Jordan also added 7 strikeouts without allowing a walk. Christopher Moral managed the lone hit for the Cubs breaking up the perfect game with a double in the 3rd inning. It is the type of performance that must have Yankees fans questioning the reason he is no longer in pinstripes. Jordan is 4-0 and sports a 0.35 ERA since being traded for Harrison Bader who is currently on the injured reserve.

Albert Pujol’s 7th HR in 10 games was the only run of the game as the Cardinals picked up their 8th consecutive win. St.Louis still maintains a 5-game lead in the National League Central over Milwaukee.

Toronto, Seattle, and Tampa Bay all sit essentially tied in the American League wild-card standings. The surprising part of that statement is that Boston is now nowhere to be seen in that race. The Red Sox now sit six games back of the Blue Jays in their quest for postseason action after spending much of the season in contention.

It has been a comedy of errors and mishaps for the Red Sox this season that was plagued with poor fielding, blown leads and injuries. Of course, no one is likely to forget the 28-5 drubbing they suffered at the hands of these same Blue Jays earlier this summer.

Rookie Josh Winckowski makes his 13th start of the season for Boston tonight. He has not exactly been good to start his career with a 5.19 ERA and 1.50 WHIP. But the Red Sox injuries in the starting rotation and lack of depth leave the team with few options other than to keep sending the youngster to the mound and hope for the best. Josh allowed 2 HR and 6 runs total in his last start in Pittsburgh.

Meanwhile, Ross Stripling has been pitching fantastically for the Blue Jays and sports an impressive 2.93 ERA and 1.03 WHIP. His last start was perhaps his best of the season allowing just 1 hit and no runs against the Orioles.

The Blue Jays narrowly missed completing the four-game sweep in New York this weekend but have still been playing impressively lately. The 8.5 game separation from the Yankees seems a tall order to overcome despite the Yankees’ recent struggles. But the Blue Jays and their fans still have high hopes for this team and nothing short of an American League playoff spot and a wild card series win will satisfy those expectations.

Everything points to a Blue Jays win in this matchup for all the reasons stated above. Toronto holds a 10-3 season advantage with six games left between the team this season. I see no reason to believe that trend will reverse today.

I am not a fan of the White Sox this season as they just seem a bit over-rated. But I do have to make an exception for Dylan Cease who has continued to pitch masterfully throughout his team’s struggles. Allowing just 98 hits in 133 innings with 177 Ks are Cy Young worthy numbers. He certainly gives his team the chance to win every time he takes the mound.

The Orioles have exceeded everyone’s expectations this season and I feel a bit uncomfortable betting against them. But I can fade them in this game in an unfavourable pitching matchup and still back them the rest of this series.

Subscribe to my SubStack to get all my daily previews and recaps for MLB, NCAAF, NBA, & UFC delivered directly to your inbox.  To get all my Daily Best Bets texted to directly, you can subscribe to my DubClub. You can also follow more of my NBA writings at Last Word on Sports or find me on Twitter to stay updated on my latest blogs.