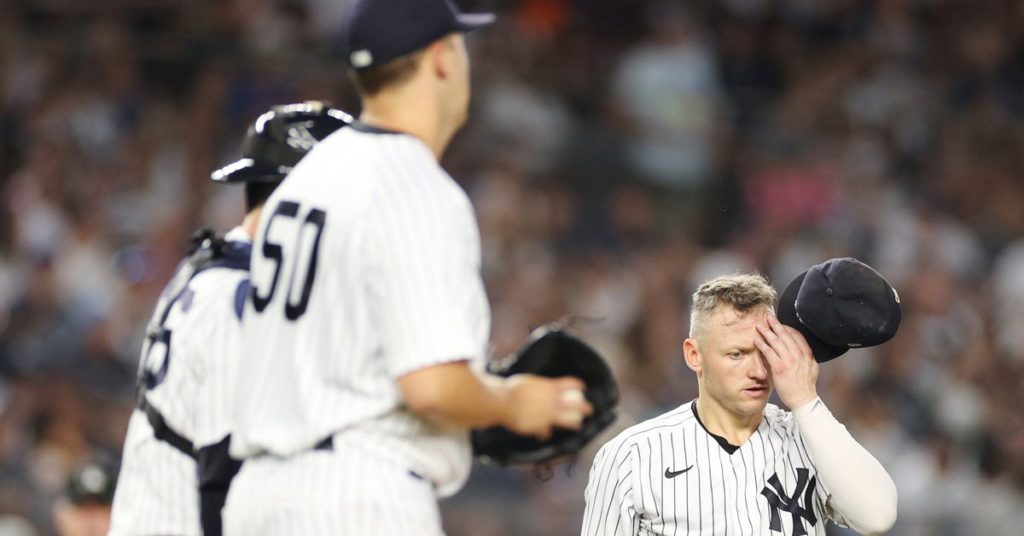 Could the Yankees really blow their AL East lead?

The New York Yankees led the American League East by 15.5 games on July 8th. That number is now down to just 8 about six weeks later making some fans wonder if their 2022 American League East pennant is now in jeopardy. The Yankees are now 5-12 in August and 9-17 post-all-star game. The Yankees are fortunate that both Toronto and Tampa Bay have not been hot over the same time and taken an even bigger bite out of the lead.

Yankee manager Aaron Boone was predictably “ticked off” at his team’s recent poor play and called his players out to play better without giving excuses. The Yankees have two more games left the weekend against the second-place Blue Jays plus three more in late September. They will need at least a couple of wins over Toronto still this season to ensure the giant collapse doesn’t become a reality.

New York sends their ace Gerrit Cole to the mound today to try and stop the bleeding.

Angel’s Patrick Sandoval pitched his first career complete game and shut out allowing just four hits. The Angels got a solo shot from Jared Walsh in the second inning for the game’s only run in Detroit.

Guardian’s Tristan McKenzie overcame two runs allowed in the first inning to finish strong with a career-high 14 Ks as Cleveland came from behind to beat the White Sox in a key central division matchup.

This is of course a rematch of the 2021 World Series that saw the Atlanta Braves beat the Houston Astros in six games. The Braves won game one of this three-game series last night 6-2.

The pitching matchup features Christian Javier for Houston and Spencer Strider for Atlanta. Both starters have been dominant for their teams this season so runs may be at a premium for this contest.

Yordan Alvarez was removed from last night’s game with an undisclosed illness and is currently listed as day-to-day. The Astros have not yet said if he will be cleared to play tonight. Alvarez was replaced by Mauricio Dubon in the 5th inning. Dubon also had to leave that game after injuring his wrist in a collision with the center field fence.

It was another split of games for me yesterday but it did show a profit. I won a best bet win on Tristan McKenzie’s strong outing and a comeback win over the White Sox. But the Astros were dumped 6-2 by the defending champs as underdogs.

This is a high price to pay on the Mariners today, but this can be the only correct play. Either you have to go with Seattle here or lay off the game. No other team has been better than Seattle this summer than the Mariners (with the possible exception of Houston). They are through the most difficult portion of their schedule this season and I expect to see them start stretching their lead in the American League wild-card standings.

Seattle is 8-3 already this season against Oakland with 8 games still remaining on the schedule between the teams for this season. Logan Gilbert (10-5) had a tough stretch of games recently with four consecutive starts against the Astros and Yankees. But against the weaker teams in the American League, he has been quite dominant.

Oakland broke off a recent 9-game losing streak with a couple of wins against Texas, but they appear primed to start another such streak. They have allowed 10 runs in each of their last two games and there is no reason to think it couldn’t happen again tonight.

I like taking the Rangers in these big underdog roles. They are a good value play as I feel the team is better than their record suggests. They mash the ball as well as most other teams in the American League including the Twins and are capable of going off on any given night.

I feel this line should be closer to a pick’em so I’ll go with the underdog in this matchup.