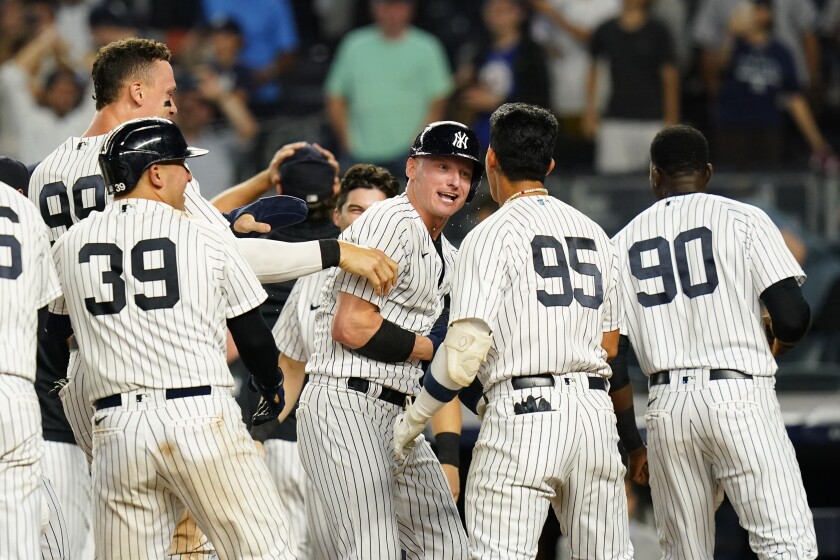 My featured American League game from last night turned out to be an instant classic and possibly the best game of the entire season. The Yankees trail the game 4-0 in the 6th inning before mounting a comeback and sending the game into extra innings. But Aroldis Chapman gave up three runs to the Rays in the 10th and the comeback appeared like it was going to come up short.

That is until Josh Donaldson come up to bat in the bottom half of the 10th with the bases loaded and crushed a walk-off grand slam into the right field bleachers sending the crowd and players into a frenzy. Donaldson became just the third Yankee in team history to hit a grand slam to end a game with the team trailing by three runs. The other two players to accomplish the feat? Babe Ruth and Jason Giambi.

The Yankees and Blue Jays kick off a critical four-game series in New York tonight. The Yankees still hold a 10-game lead in the American League East despite their 9-16 post-all-start break record. The Blue Jays haven’t been lighting it up lately either with just 4 wins in their last 13 games. Toronto could not capitalize on the Yankees’ recent struggles and close ground in the standings. But they are still clinging to a wild-card spot in the American League.

Both teams broke out of recent slumps last night by getting key wins last night. New York’s emotional win last over the Rays is the type of game that can change the course of an entire season. The Blue Jays held off the surging Orioles last night 6-1 to maintain their precarious grip on their playoff status. Toronto desperately needs at least a split of this series to keep pace with several teams trying to catch them.

Frankie Montas makes his third start for the Yankees after being acquired from Oakland. He was rocked in his first appearance in St.Louis and came back with a better effort to pick up a win in Boston.

Jose Berrios has disappointed the Blue Jays this season after being a key acquisition at last year’s deadline. The Blue Jays need Jose to elevate his game if they hope to make a run in the standings and make some noise in the postseason.

It will be interesting to see if the Yankees can use last night’s game to ignite their team morale and refocus their efforts heading into the stretch run. Aaron Judge extended his streak without an HR to five games. But he leads the American League with 46 and is still on pace to break the Yankees’ team record of 61.

I was on the Rays last night and that was looking good most of the night until the very end. I did hit the Blue Jays last night who took care of the Orioles 6-1.

I am a firm believer that the Astros should be the favourites to win the World Series this season. Backing them in every game that is reasonably priced is a significant part of my strategy for this season. Chicago has been playing better of late, but they are still a tier or two below the Astros.

Houston has the advantage in nearly every category in this matchup and laying (-125) is not enough to keep me from this wager.

I am going to ride the high that the Yankees must be riding after last night’s dramatic comeback win. The Yankees should use that game as a rallying point towards a more productive final few weeks of the regular season.

The Blue Jays still lack some intangibles that I cannot quite put my finger on. They do not have the killer instinct that characterizes quality playoff teams. They will need to find that extra gear to surpass a team like the Yankees.

The pitching matchup today also favours the Yankees and the (-144) price does not seem unreasonable.