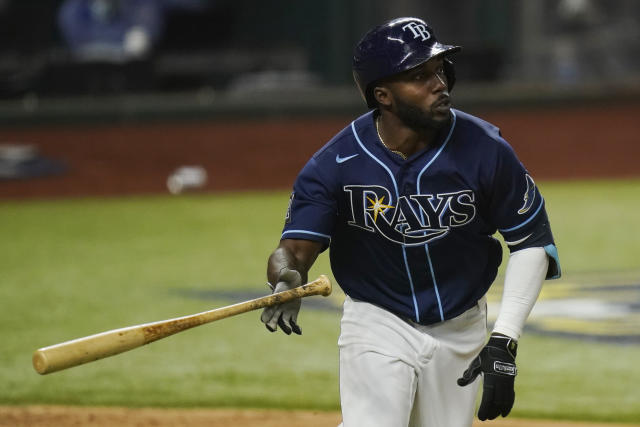 The Yankees picked up their first run after 27 consecutive scoreless innings when Benintendi came in from third on a fielding error in the 5th inning of last night’s contest. Unfortunately, it was the only would they would manage on the night as the Yankees dropped another game to the Rays, 3-1. The loss dropped their post-all-star game record to 8-16.

That type of inefficiency from the Yankees would have been unthinkable just a few short weeks ago. After starting the season on fire with a 56-21 record at the end of June. The club now looks lifeless and even bad at times. It is safe to say other teams in the American League have lost their fear of the Yankees and they could be prime for an early playoff exit this year.

Tampa Bay finds itself in the middle of a stacked American League wild-card race. They currently hold down one of those spots, but they are now 6 teams within 2.5 games of each other. If you include Cleveland in that group who lead the Central division by just one game, there are essentially 7 teams now vying for four playoff spots who are all in that pack.

The Rays continue their consistently good play we have come to expect from them. They don’t do anything too fancy, just quality starts, solid fielding, and clutch hitting. They are not the most talented team in the league, but they seem to find ways to win regardless.

Randy Arozarena provided all the offence the Rays would need to beat the Yankees last night with a three-run shot in the first inning. It was Ray’s 4th win in a row. They send Corey Kluber to the mound tonight who got rocked for 7 runs in 5.2 innings in his last outing against the Orioles.

The Yankees look to return pull themselves out of their massive batting slump tonight and return to early season form. Aaron Judge leads the American League with 46 HRs but hasn’t one in four games. The club seems to miss Matt Carpenter badly who is out of the line with an ankle injury. Domingo German takes the mound tonight who has been inconsistent so far this season after missing the first half of the season.

I had a good night yesterday picking up two underdog winners. The Yankees lost again this time 3-1 to the Rays, but at least they scored a run. Sears had another strong outing shutting down the Rangers 5-1. Let’s keep that momentum going tonight.

This is an incredibly vital game for the Blue Jays today. They have lost 3 in a row including the last two against Baltimore. If they lose against today, they will fall outside of a playoff spot and behind the Orioles in the standings. The pressure is mounting on this club to string some wins together to create some separation in the American League wild-card standings. A loss today and the cries from the fans and critical Toronto media would be loud with discontent.

It is difficult for me to pick against the Orioles who are playing fast and loose with house money. But Toronto is still the better team here playing at home. The pitching matchup also favours the Blue Jays today, especially with Voth on the mount who is prone to giving up big innings of which Toronto thrives. Ross Stripling has been very reliable and always gives the Blue Jays a chance to win when he is on the mound.

I am going to come back with the Rays again tonight. There is really no other play to make on the Yankees right now who continue their incredibly poor play of late.