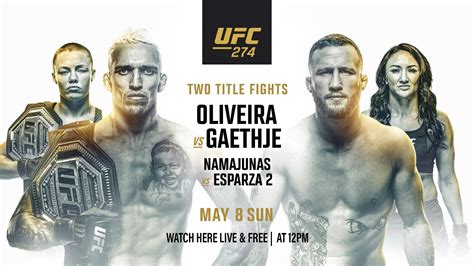 The NBA Playoffs take a day today off today so I will be shifting my focus to the stacked UFC 274 card set to go down Saturday night in Phoenix. The card features two title bouts as well a handful of fights that should be wildly entertaining. I hit a nice underdog pick last weekend with Marlon Vera getting the decision against Rob Font.

This is what I would call a legacy fight for Rose Namajunas. This is a rematch fight of the first women’s Strawweight title fight. Rose looks to avenge that loss and cement her claim as the best fighter in the history of the division.

What is unusual about this title matchup is that Esparza is likely the fifth-best fighter in this division. Rose has already beaten the second and third best opponents in the division twice each. Marina Rodriguez was likely more deserving of the title shot, but Esparza got the nod in large part due to her victory against her eight years ago. Carla has no claim to being the top contender, she is simply next.

I took the time to rewatch the first fight eight years ago. Rose was winning the striking battle before making a series of bad mistakes. She was too reckless with some leg kicks allowing Esparza to get some easy take-downs. Namajunas’ cardio also let her down in the second round as she was unable to maintain the fast pace she set in the first. I do not expect the now stoic and battle-tested Namajunas to make either of those mistakes again.

Namajunas has a significant striking advantage against every fighter in this division. This will be especially so against Esparza with a four-inch height and two-inch reach advantage. Esparza’s only real hope is to once again dominate with takedowns and control to get a split decision. This scenario seems equally implausible. Even if the fight goes to the ground, there is no guarantee she will have an advantage as Namajuas has superb scrambles and BJJ.

The best-case scenario for Esparza in this fight is a five-round unanimous decision loss. I am happy laying the money on the 2:1 favourite here.

Old school fight fans should appreciate this matchup between two veterans of the UFC. It is an unusual fight in the sense that it has no significance in the rankings as both fighters are well past their primes.

This is a farewell fight for a legend of the sport, Donald ‘Cowboy’ Cerrone. As for Joe Lauzon, he is essentially coming out of retirement as a sacrifice to send Cerrone into retirement with his hand raised. It is safe to assume that Dana White handpicked this opponent knowing it should result in a victory for Cerrone. Cowboy hasn’t had a victory in the octagon in three full years putting up 5 losses and a no-contest during that span. He faced several tough opponents during that stretch but his age is now getting the best of him at 39.

Joe Lauzon is also a veteran of the UFC but his career has not been as relevant or entertaining as Cerrone’s. He was never really more than an average opponent in the Lightweight division and hasn’t had a quality victory in nearly six years when he took care of Diego Sanchez. In fact, it has been a full two and a half years since Joe has even seen the inside of the octagon. I’d be quite surprised if he has actually gotten better.

UFC 274 will be Donald Cerrone’s last fight and he should get an easy victory.

Shocking news yesterday from as Charles Oliveira was unable to make 155 lbs and has been stripped of his UFC lightweight belt. He had one hour to try to cut the just half-pound necessary to keep the fight intact but has unable to do so. With a victory, Gaethji will still come the lightweight champion, but Oliveira can only become the top contender for the vacant belt in his next fight with a win.

I originally wrote a piece about why I thought Oliveira would likely win this fight but I had to seriously reconsider this position after hearing this news. The difficult weight cut should have little effect on Charles physically, but psychologically it could have a tremendous impact. The fight game is intensely demanding psychologically and this could be just the excuse needed for Oliveira not to be 100% focused on the dangerous task in front of him.

Dustin Gaethji is a dangerous man. Dustin will either KO Charles or go to sleep trying. Every punch he throws in this fight will have the intention of putting his opponent out or at least setting up a punch that will. He will not back down and only push forward. I do not see this fight going the full five rounds. In fact, I may even look at the total rounds under (1.5) +169 as a side bet.

But Charles Oliveira is the UFC champ for a number of very good reasons. No one in this division is strong enough at BJJ to compete with him on the ground. If this fight goes to the ground or he gets standing back control, the fight is likely to be over shortly thereafter.

But in the end, I cannot overlook the horrible oversight of the missed weight and cannot help but question if there were any other oversights during his training camp. When talking about championship fights, it is often the small details that can make the difference in becoming or remaining champion. I can therefore only back the underdog Gaethji to win this UFC fight.

Sign up to my Newsletter to get all my daily Best Bets in the NBA playoffs, MLB & UFC delivered directly to your inbox by 1 pm EST daily for just $25 per month. Unsubscribed readers can still enjoy my free picks released regularly during the season or my Best Bets released one hour before game time.