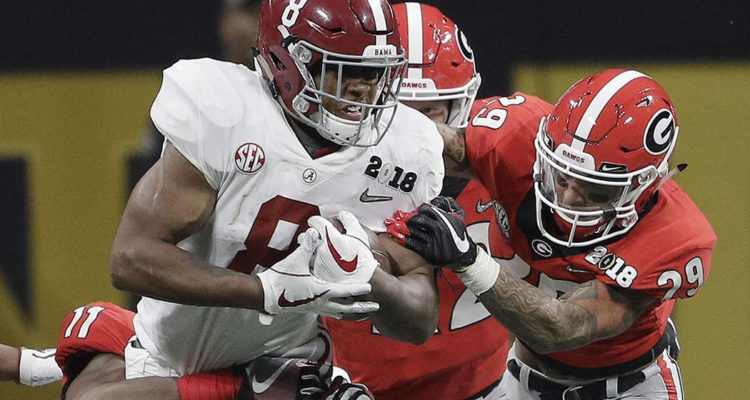 Georgia played a near perfect game last week against Georgia Tech, 6 touchdowns, 0 INTs, 0 fumbles and 0 penalties. They were just one sack away from being perfect on offence for the entire game, a feat I have never witnessed personally. Do we need to state again how good this defence is again after another shut out?

What this tells me is that the Bulldogs are peaking at the right time. They are, and should be the clear favourite to win the National Championship and will make the NCAAF playoff even if they manage to lose this game.

Alabama look vulnerable last week against Auburn and were actually very fortunate to win this year’s Iron Bowl. They trailed the entire game needing a last second comeback and OT to win. The Tide actually looked better earlier in the season and seem to be regressing a little down the stretch. The offence just doesn’t look like the dominant group we are accustom to seeing from this program. I don’t see how the are going to score more than 13 points against Georgia. TENN, with their up tempo offence, was the only team this year to do so with just 17.

That means Georgia will likely only need to put up 3 touchdowns to cover this line. I like their chances of doing so.

Oklahoma St is the most under-rated team in NCAAF and I have been betting them pretty much all season. They are the one team I feel have the best chance of knocking off Georgia. They have both the number one offence and defence in the Big 12. They did not even play well last week needing a comeback to beat Oklahoma. I expect their A game in this matchup, however and for them to get a solid two score victory.

The Baylor Bears are a solid Top 10 team. They have a well balanced efficient offence and tough defence. But there should be little question as too who the better team is and I think the Bears are going to struggle in this matchup.

I saw that the Cowboys are still +400 to make the NCAAF playoff. I will take that bet as well. If they get a good victory here and Georgia takes care of Alabama (or a Cincinnati loss), they should be in.

I have bet on both of these teams most of the season and each have done well for me.

Demon Deacons have had their best season in my memory and just getting to the ACC Championship game is a major accomplishment for this team in a division traditionally dominated by Clemson.

But for me, this matchup comes down to the PITT QB Kenny Pickett. He is the best player on the field and I expect him to be the difference in this matchup. He has high hopes of cracking a NFL lineup next season and having a good game here would go a long way for him to accomplishing that goal. He is a highly accurate passing with tremendous scrambling ability. As long as the defence does not let him down, I see him leading the Panthers to their first ACC conference championship since Dan Marino did it in 1981. I will be cheering for him to do so.

It has been a fantastic season of college football and I am now 128-86 (59.8%) +31.5 units for the season despite a losing final week. Be sure to check my Daily Picks page regularly for all my sport betting picks and game analysis. With NCAFF wrapping up here soon, I will be transitioning to NBA over the next couple weeks.