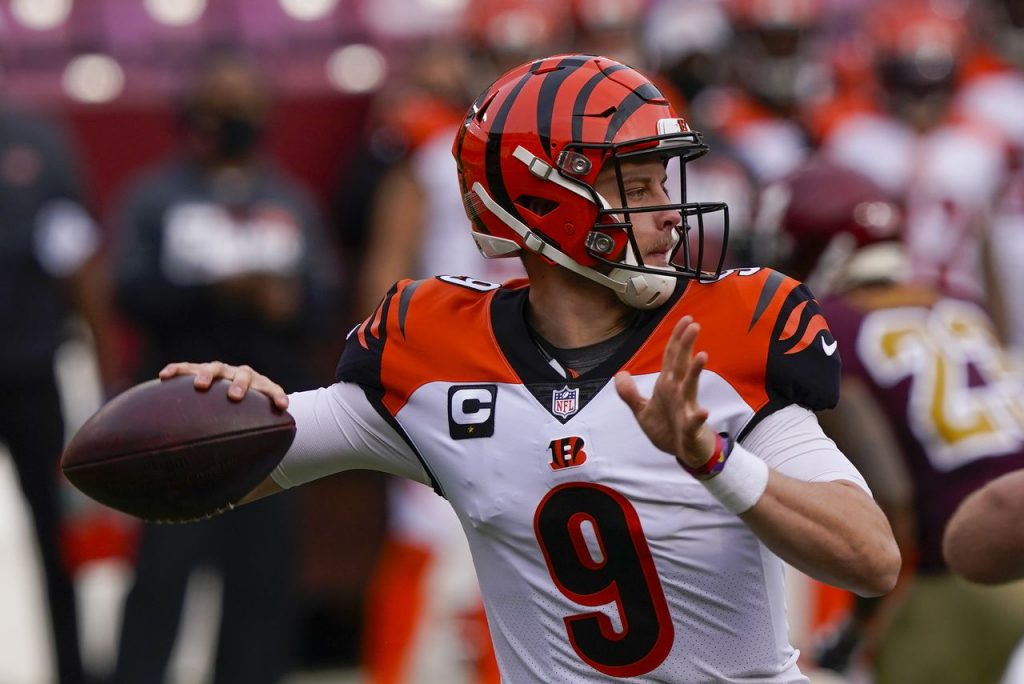 Joe Burrow and the Bengals looked good last week beating the Vikings in OT. The key play in mind was the play action pass on fourth with less than a minute left in OT setting up the winning field goal. It showed tremendous confidence by head coach Zac Taylor trusting his sophomore number one overall selection in Joe Burrow with the game on the line.

Joe looks ready to lead this to an 8 or 9 win season and perhaps better next year. The Bengals also rushed for an impressive 36 for 149 in rushing which will make Burrow’s life easier if their opponents have to respect the play action pass.

The Bears look bad in LA in the Sunday night game. Former Bengal QB Andy Dalton leads the Bears still at this point, but he will be on a short leash as Justin Fields eagerly awaits his opportunity to start for the Bears at QB. The Bear’s offensive line still does not look good and they really struggled to protect Dalton. The Bears are not going to score many points this season as a result and I do not feel the line on this team has adjusted sufficiently for the Bears.

This line opened at (-3) for the Bears, but is being bet down hard as most of the action is coming in on the Bengals. I recommend getting down early if you can as this line is likely to continue dropping. This is a case of two teams moving in different directions.

The Steeler defence stole the game in Buffalo last week making a couple of key fourth down stops. They also got a strip sack and a blocked punt for a TD which really was the difference in this game. The Steeler’s offence still does not look good as they cannot run the ball effectively and the have no deep threats. The Steelers rushed just 21 time for 75 yards and that just isn’t going to cut it in the NFL.

The Steeler defence is going to keep them in most games this season, but it will be too much to ask of them to steal games every week. This is not the type of team I want to be laying a bunch a points on. They may be a pick and underdogs, but I don’t expect many opportunities to do that.

The Raiders had a good game on Monday night beating the Ravens in a crazy OT game. David Carr had a nice night passing for over 400 yards and this team may be able to put up some good point totals this season. The 6 point line here is a big bonus and should come into play a large percentage of the time in what could be a low scoring game.

I am taking the points and once again fading this overrated Steeler team.

The Dolphins narrowly escaped NE with a win thanks to a couple key fumbles and miscues by the Pats. Tua played game management and still managed to throw a bad interception. Dolphins failed to run the ball as well so they will continue to struggle scoring points this season.

I expect this game to be a blow out as the Bills are clearly the superior team in this matchup, so I am happy only laying the three points.

No team looked better than the Arizona Cardinals in week 1 and I have admit to being on the wrong side of that blowout in TEN. The Cardinal’s defence destroyed the Titan’s offensive line with an incredible 6 sacks and 8 pass deflections. They also held the best RB in the NFL Derrick Henry, to just 58 yards on 17 carries. If that is a true sample of what this defence is going to look like the rest of the season, the Cardinals will challenge for the NFC west title and should at least get a wild card.

I have no problem admitting when I am wrong and I clearly was about the Cardinals. I am going to reverse my opinion this week and pick them the beat and average Viking team at home

Be sure to check back here Daily for all your NFL, NCAAF and CFL picks every week for free. I will be releasing my late NFL picks either Saturday night or Sunday morning.